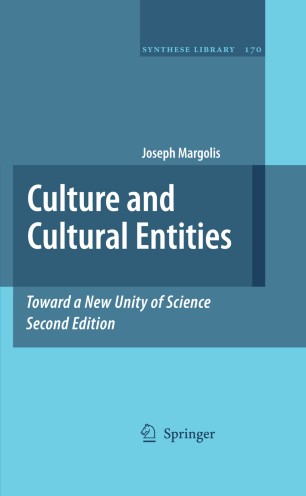 Culture and Cultural Entities provides an original philosophical analysis of the nature and explanation of cultural phenomena, with special attention to ontology and methodology. It addresses in depth such topics as: the relation between physical and biological nature and cultural phenomena; the analysis of intentionality; the nature and explanation of action; causality; causal explanation and the unity of science; theories of language; historicity; animal and human intelligence; psychological and social phenomena; technology and evolution. Its approach features a form of non-reductive materialism, examines a wide range of views, and is highly readable, making it suitable for professionals, advanced undergraduate and graduate students, and an informed general audience. A new chapter was added to give a sense of pertinent trends since the appearance of the first edition, particularly with respect to the history of philosophy, pragmatism, the unity of science, and evolution. The unity, scope, and simplicity of the theory are well-regarded.

The author is currently Laura H. Carnell Professor of Philosophy at Temple University (Philadelphia, USA). He's taught and lectured widely in the United States and worldwide and has published close to forty books. He received an honorary doctorate from the University of Helsinki and has been awarded a fulbright fellowship to Sweden.

He's written widely in most of the principal areas of philosophical research and is particularly known for his attempt to integrate the whole of philosophy in terms of a close analysis of the cultural world: with special attention to the analysis of the self; history and historicity; language, art and technology; the physical and human sciences; action and meaning; mind and knowledge, theory and practice. He's particularly known for his heterodox defense of the flux (against invariance); the artifactual nature of the human self (against a biologized human nature); the subsumption of the physical sciences under the more general concerns of the human sciences; problems of intentionality (penetrated in culturaly significant ways); the defense of relativism, emergentism, historicism, and non-reductive materialism. He is also known for his sustained analysis of American philosophy during its most important and influential period and his reinterpretation of the prospects of a redirected pragmatism within the whole of Eurocentric philosophy.

“The second edition … complements the holistic vision of science with a brief search for the historical roots of that ontology of culture which provides us with good arguments for the (not only methodological but also ontic) autonomy of the human sciences. … rigorous, comprehensive and slim book gives us an excellent example of how such an advocacy can be carried out. … Margolis is especially successful in demonstrating the natural-cultural interplay in his treatment of language.” (Dimitri Ginev, Metascience, Vol. 19 (3), November, 2010)
Buy options