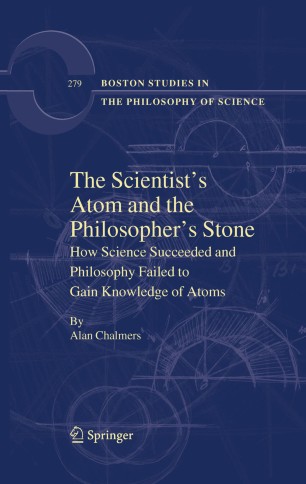 The Scientist’s Atom and the Philosopher’s Stone

How Science Succeeded and Philosophy Failed to Gain Knowledge of Atoms

Part of the Boston Studies in the Philosophy of Science book series (BSPS, volume 279)

Drawing on the results of his own scholarly research as well as that of others the author offers, for the first time, a comprehensive and documented history of theories of the atom from Democritus to the twentieth century. This is not history for its own sake. By critically reflecting on the various versions of atomic theories of the past the author is able to grapple with the question of what sets scientific knowledge apart from other kinds of knowledge, philosophical knowledge in particular. He thereby engages historically with issues concerning the nature and status of scientific knowledge that were dealt with in a more abstract way in his What Is This Thing Called Science?, a book that has been a standard text in philosophy of science for three decades and which is available in nineteen languages. Speculations about the fundamental structure of matter from Democritus to the seventeenth-century mechanical philosophers and beyond are construed as categorically distinct from atomic theories amenable to experimental investigation and support and as contributing little to the latter from a historical point of view. The thesis will provoke historians and philosophers of science alike and will require a revision of a range of standard views in the history of science and philosophy. The book is key reading for students and scholars in History and Philosophy of Science and will be instructive for and provide a challenge to philosophers, historians and scientists more generally.

“Chalmers presents a comprehensive history of the atom, from antiquity to the early twentieth century. … Chalmers’s account draws on his distinction between philosophical and scientific versions of atomism. … His writing and exposition are clear, and the account is well documented and balanced and draws judiciously on primary and secondary sources. It should be of interest to historians and philosophers of science and to scientists more generally.” (Victor D. Boantza, ISIS, Vol. 103 (1), 2012)

“This book offers a conceptual history of atomism from the pre-Socratics to the end of the nineteenth century. … the first covers ancient Greek and medieval atomic and matter theories; the second deals with the scientific and chemical revolutions; and the third takes the story from Dalton through to the experimental discovery of the electron … . Chalmers makes his arguments clearly, powerfully and well. … inspire debates not only in those fields, but also in related fields within science studies.” (Seth Suman, British Journal for the History of Science, Vol. 44 (3), September, 2011)

“Alan Chalmers has strong views about what does and does not deserve to be considered ‘science’. In this book he examines a number of historical developments that are frequently cited in accounts of the origin of the outlook … . those generally used in introductory chemistry courses––and to take issue with specialized historians and philosophers. … historical stories widely used as background for introductory chemistry courses merits the serious attention of professional philosophers and historians, and also of science educators.” (Joseph E. Earley, Foundations of Chemistry, Vol. 13, 2011)

“Alan Chalmers has written by far the most important and incisive book of recent years on the fundamental and difficult notions of atoms and atomism. … In each chapter of his book Chalmers outlines modern lines of scholarship concerning the history of chemistry and physics … . Chalmers’ book is a masterpiece in the history and philosophy of science and on a neglected topic of great importance. It should be read by everyone with an interest in the field.”­­­ (Eric Scerri, Metascience, Vol. 19, August, 2010)

“The current book arose from Chalmers teaching of an advanced level HPS course … in the early 1990s. … a detailed scholarly work for graduate students, historians and philosophers. … Chalmers’ extensive research (about 250 references cited) his clarity of expression and well structured argument mean that both immodest realists and constructivists can benefit from a close and thoughtful reading of Atomism.” (Michael R. Matthews, Science & Education, March, 2010)