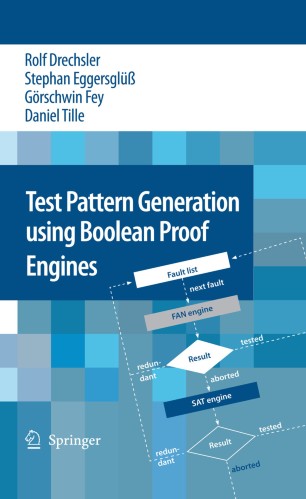 After producing a chip, the functional correctness of the integrated circuit has to be checked. Otherwise products with malfunctions would be delivered to customers, which is not acceptable for any company. Many algorithms for "Automatic Test Pattern Generation" (ATPG) have been proposed in the last 30 years. But due to the ever increasing design complexity, new techniques have to be developed that can cope with today’s circuits. While classical approaches are based on backtracking on the circuit structure, several approaches based on "Boolean Satisfiability" (SAT) have been proposed since the early 80s.

In Test Pattern Generation using Boolean Proof Engines, we give an introduction to ATPG. The basic concept and classical ATPG algorithms are reviewed. Then, the formulation as a SAT problem is considered. As the underlying engine, modern SAT solvers and their use on circuit related problems are comprehensively discussed. Advanced techniques for SAT-based ATPG are introduced and evaluated in the context of an industrial environment. The chapters of the book cover efficient instance generation, encoding of multiple-valued logic, usage of various fault models, and detailed experiments on multi-million gate designs. The book describes the state of the art in the field, highlights research aspects, and shows directions for future work.