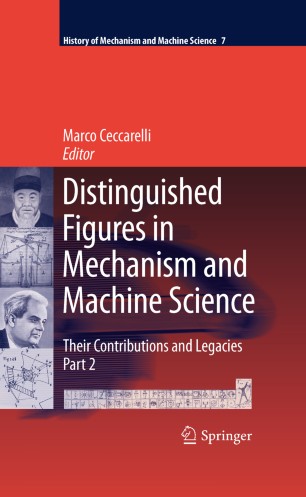 Their Contributions and Legacies, Part 2

Part of the History of Mechanism and Machine Science book series (HMMS, volume 7)

This is the second volume in a series of edited books whose aim is to collect contributed papers devoted to descriptions of the life and work of famous persons in MMS (Mechanism and Machine Science).

Papers illustrate personalities by recognizing the people as well as their scientific activities, by looking mainly at technical developments in the historical evolution of the fields that today are grouped in MMS. Thus, the emphasis is on biographical notes describing the efforts and experiences of people who have contributed to the technical achievements at the core of each contributed paper. The papers in this second volume again cover a wide range within the field of the History of Mechanical Engineering with specific focus on MMS and will be of interest and motivation to the work (historical or not) of many.

“An encyclopaedic work in which the emphasis is placed on figures who have contributed to the technical development of mechanics, understood as machine science. It is a work that may be of interest to both engineers and historians of science and it is useful because it focuses on figures that are missing in many histories of mathematics and science.” (María de Paz, Mathematical Reviews, November, 2017)
Buy options