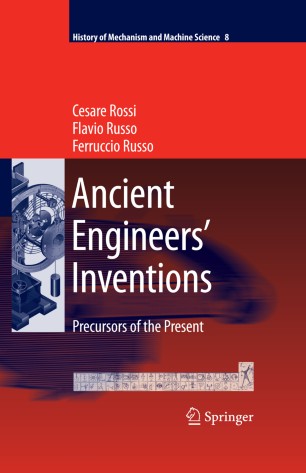 Part of the History of Mechanism and Machine Science book series (HMMS, volume 8)

This book describes the inventions and designs of ancient engineers who are the precursors of the present. The period ranges mainly from 300 B.C: to 1600 A.D. with several exceptions. Many of the oldest inventions are documented by archaeological finds, often very little known, mainly from Pompeii, Herculaneum and Stabiae and reveal a surprising modernity in their conception.

Most of the inventions presented in the first four parts of the book were conceived up to the late Roman Empire and may be considered as milestones, each in their respective field. The fifth part concentrates on more recent centuries. The sixth part deals with some building construction techniques.

Generally, for each of the presented inventions, three elements of research and reference are provided: written documents (the classics), iconic references (coins, bas-reliefs, etc.) and archaeological findings.

The authors did not write this book for engineers only; hence they describe all the devices without assuming wide technical knowledge. The authors’ main aim is to try to communicate their enthusiasm for the inventions and the inventors of the past and to  contribute to the fascinating study of the History of Engineering.

Cesare Rossi was born in Naples on 26 July1955. In 1973 was graduated at High School focusing on Humanities.

In the first years of his career he has worked at the Istituto di Meccanica Applicata alle Macchine (Applied Mechanics Institute) of the University of Napoli "Federico II, attending researches on traction fluids for variable speed gearboxes and cooperating at several doctoral theses. In that period he was research fellow of the A.T.A. (Automobile Technicians Association) at the same University Institute.

Then he has been the technical manager of a textile industry and later designer of tools for aircraft’s tests and maintenance at an aerospace industry.

In Dec.1983 he was appointed Ricercatore Universitario (Assistant Professor) at the Applied Mechanics Institute (then Department of Mechanical Engineering - D.I.M.E.) of the University of Napoli "Federico II".

From 1 nov.2000 has been appointed Full Professor of Applied Mechanics at the same University.

Presently teaches Mechanics Fundamentals and Robot Mechanics both to Mechanical and Automation Engineering students. He is supervisor of Master and Ph.D. theses and professor at the Ph.D. coursed at the same University.

He participated to many International Conferences, often with invited lectures and as Chairman.

Since several years he is interested in studies and researches on the History of Engineering and presently he cooperates with researchers (also on the field) mainly in which the Classic Age is concerned.

He is a member of the A.I.S.I (Italian Society for the History of Engineering).

FLAVIO RUSSO was born in Torre del Greco (Naples) in 1947. He was graduated at High School focusing on Humanities and then received the Mining Engineer Degree at the University of Rome.

Has been studying military architecture and military history in general for the past thirty years, focusing especially on military technology.

For ten years he was member of Scientific Councils of the Italian Institute for the Castles and of National Committee for Studies of Fortified Architectures at the Italian Cultural Heritage Department.

He has given invited lessons and short courses at the Universities of Molise, Napoli "Federico II" and Salerno; at the same Universities he was co-supervisor of some doctoral theses.

For more than 20 years he cooperates with USSME (Historical Bureau HQ Italian Army) and is member of the committee for the editorial proposals.

He designed and built some full scale and working of Roman artilleries committed by the Cultural Heritage Department; these reconstructions are actually shown at the archaeological area of Saepinum.

He writes for several national magazines focused on History, Technology, Achaeology and Militaria.In addition to a large number of scientific publications, he is also the author of many volumes on history and ancient technologies. Some of them were published for the Historical Bureaus of the Italian Army, Italian Navy and Italian Air Forces.

For the N.A.T.O. Allied Maritime Component Command he has recently published:

- 79 A.D. Corse for Pompeii, Inquiry on the death of an Admiral.

Actually he is working at the reconstruction of a roman water wheel, starting from archaeological finds.

FERRUCCIO RUSSO was born in 1980 and is a student of History at the University of Napoli "Federico II". He has been working for several years with computer graphics, specifically with photo-similar three-dimensional virtual reconstructions of mechanical devices, archeological artifacts and architectural structures. His tables have also appeared in numerous national magazines.

He is autor of several illustrations and a book for the Historical Bureau of the Italian Army and for the Istituto Poligrafico e Zecca dello Stato (Italian Mint Institute).

He arranged several exhibitions in which graphical reconstructions of historical topics where shown.

He is co-autor of several books by Flavio Russo.

“A lovingly compiled catalogue of engineering achievement, prepared most especially for young engineers, and dedicated to the appreciation of the works of pioneers. The reader is shown the problems and guided to their solutions, via all the technical detail needed to command attention. The target reader is thus served, under these terms of reference, well. … All in all, we have a collection of ingenious devices, well-described, frequently ‘reconstructed’ and lovingly commemorated.”­­­ (Michael A. B. Deakin, Metascience, Vol. 19, March, 2010)
Buy options