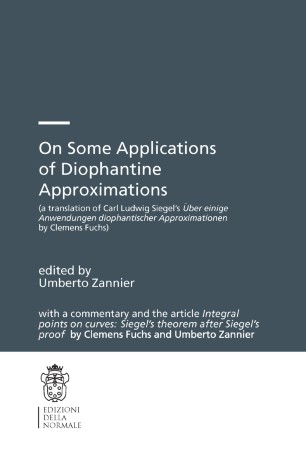 On Some Applications of Diophantine Approximations

a translation of Carl Ludwig Siegel’s Über einige Anwendungen diophantischer Approximationen by Clemens Fuchs, with a commentary and the article Integral points on curves: Siegel’s theorem after Siegel’s proof by Clemens Fuchs and Umberto Zannier

Part of the Publications of the Scuola Normale Superiore book series (PSNS, volume 2)

This book consists mainly of the translation, by C. Fuchs, of the 1929 landmark paper "Über einige Anwendungen diophantischer Approximationen" by C.L. Siegel. The paper contains proofs of most important results in transcendence theory and diophantine analysis, notably Siegel’s celebrated theorem on integral points on algebraic curves. Many modern versions of Siegel’s proof have appeared, but none seem to faithfully reproduce all features of the original one. This translation makes Siegel’s original ideas and proofs available for the first time in English. The volume also contains the original version of the paper (in German) and an article by the translator and U. Zannier, commenting on some aspects of the evolution of this field following Siegel’s paper. To end, it presents three modern proofs of Siegel’s theorem on integral points.