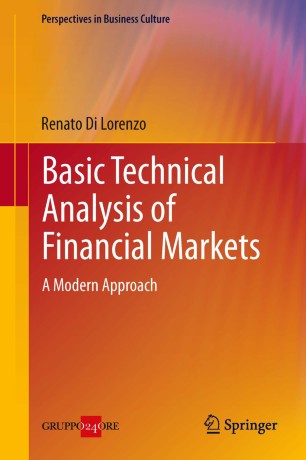 Part of the Perspectives in Business Culture book series (PEPIBC)

The present book avoids the fantasy recipes that abound in technical analysis and focuses instead on those that are statistically correct and can be understood by newcomers as well as appreciated by professionals. The described protocols and techniques will prove invaluable in analyzing market behavior and assisting in trading decisions.

The algorithms used in the technical analysis of financial markets have changed beyond recognition. This book offers a more efficient technical analysis – one that is not satisfied with protocols that just seem to be fine, but which requires that they are indeed fine, verifying this through simulations on the PC, serious statistical counts, and so on.​

Renato Di Lorenzo, an electronics engineer, graduated in 1968. Between 1970 and 1974 he was employed by Fiat and Aeritalia, first as a researcher and then as a project manager. From 1974 to 1978 he worked for Mira Lanza as Director of Strategic Planning and then as CEO of a subsidiary. For about a year he was a member of the National Economic Commission of the Italian Republican Party. From 1978 to 1980 he was Director of Central Management Control in Sidalm (Motta-Alemagna) and a lecturer at the Faculty of Economics, University of Bologna. Since 1980 he has devoted himself to management and business administration consultancy, specializing in the finance area of the banks and working intensively as a trainer and coach. He has published articles in the U.S. and a successful series of manuals for the 24 ORE Group. He has also published novels of a financial background with Mondadori and other publishers and has founded and directed a school of creative writing. His work has been translated abroad.