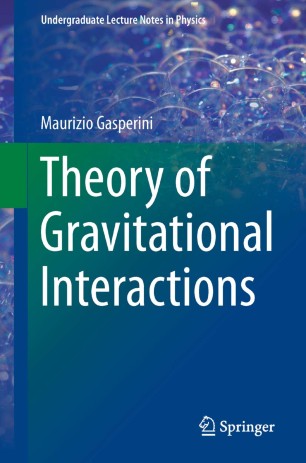 This reference textbook is an up-to-date and self-contained introduction to the theory of gravitational interactions. The first part of the book follows the traditional presentation of general relativity as a geometric theory of the macroscopic gravitational field. A second, advanced part then discusses the deep analogies (and differences) between a geometric theory of gravity and the gauge theories of the other fundamental interactions. This fills a gap which is present in the context of the traditional approach to general relativity, and which usually makes students puzzled about the role of gravity. The necessary notions of differential geometry are reduced to the minimum, leaving more room for those aspects of gravitational physics of current phenomenological and theoretical interest, such as the properties of gravitational waves, the gravitational interactions of spinors, and the supersymmetric and higher-dimensional generalization of the Einstein equations. Theory of Gravitational Interactions will be of particular value to undergraduate students pursuing a theoretical or astroparticle curriculum. It can also be used by those teaching related subjects, by PhD students and young researchers working in different scientific sectors but wishing to enlarge their spectrum of interests, and, in general, by all scholars interested in the modern aspects and problems of gravitational interaction.

Maurizio Gasperini has already published 6 books with us. He is Professor of Theoretical Physics at the Physics Department of the University of Bari, Italy. He is the author of more than 200 publications on gravitational theory, high-energy physics, and cosmology, and has twice won an "Award for Essays on Gravitation" from the Gravity Research Foundation (1996 and 1998). His former posts include a permanent position in the Department of Theoretical Physics at the University of Turin, and three appointments as Scientific Associate at CERN, Theory Division (1993, 1996 and 2005). Here, in collaboration with Gabriele Veneziano, he formulated and developed an early-cosmology scenario based on the symmetries of string theory.