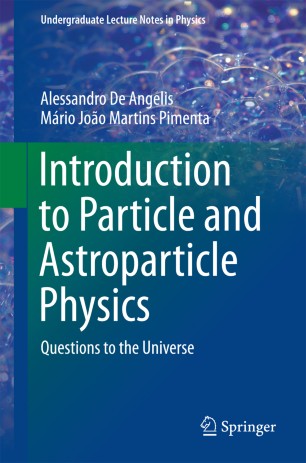 Introduction to Particle and Astroparticle Physics

Questions to the Universe

This book, written by researchers who had been professionals in accelerator physics before becoming leaders of groups in astroparticle physics, introduces both fields in a balanced and elementary way, requiring only a basic knowledge of quantum mechanics on the part of the reader. The early history of particle physics cannot be distinguished from the history of cosmic rays. With the advent of accelerators, however, the importance of cosmic rays in particle physics was lost. This situation persisted until the 1990s, when novel techniques allowed breakthrough discoveries, and exploration of new physics scales now requires returning to cosmic rays. The new profile of scientists in fundamental physics ideally involves the merging of knowledge in astroparticle and particle physics, but the duration of modern experiments is such that people cannot simultaneously be practitioners in both. Introduction to Particle and Astroparticle Physics is designed to bridge the gap between the fields. It can be used as a self-training book, a consultation book, or a textbook providing a “modern” approach to particles and fundamental interactions.

Alessandro de Angelis is a high-energy physicist and astrophysicist. Full Professor at the University of Udine and the Instituto Superior Técnico (IST) of the University of Lisbon, he is currently Director of Research at INFN Padova and chairman of the collaboration board managing the MAGIC gamma-ray telescope at the Northern European Observatory, La Palma, Canary Islands. His main research interest is fundamental physics, especially astrophysics and elementary particle physics at accelerators. After graduating from Padova University, Professor de Angelis was employed at CERN in the 1990s, and he later became a founding member of the collaboration board managing the NASA Fermi gamma-ray telescope. He has been a lecturer in electromagnetism and astroparticle physics in Italy and Portugal and Visiting Professor at the ICRR in Tokyo, the Max-Planck Institute in Munich, and the University of Paris VI.

Mário Pimenta is a high-energy physicist and astrophysicist. He is Full Professor at the Instituto Superior Técnico (IST) of the University of Lisbon. In addition he is currently Director of the Laboratório de Instrumentação e Partículas (LIP), coordinator of the international PhD doctoral network IDPASC, and Portuguese representative at the Pierre Auger Observatory in Argentina. He was formerly a member of the WA72, WA74, NA38, and DELPHI experiments at CERN and of the EUSO collaboration at ESA. Professor Pimenta’s main research interests lie in high-energy physics, especially cosmic rays of extremely high energy, and the development of innovative detectors for astroparticle physics. After graduating from Lisbon and Paris VI universities, he was employed at CERN in the late 1980s. He has been a lecturer in general physics and particle physics in Portugal; he has also lectured at the University of Udine and been visiting professor at SISSA/ISAS in Trieste.