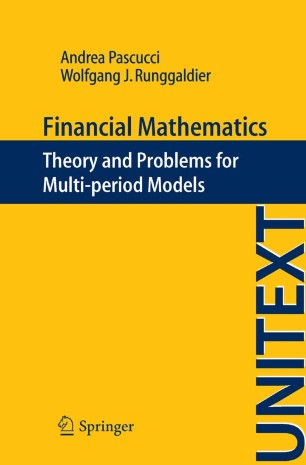 Theory and Problems for Multi-period Models

With the Bologna Accords a bachelor-master-doctor curriculum has been introduced in various countries with the intention that students may enter the job market already at the bachelor level. Since financial Institutions provide non negligible job opportunities also for mathematicians, and scientists in general, it appeared to be appropriate to have a financial mathematics course already at the bachelor level in mathematics. Most mathematical techniques in use in financial mathematics are related to continuous time models and require thus notions from stochastic analysis that bachelor students do in general not possess. Basic notions and methodologies in use in financial mathematics can however be transmitted to students also without the technicalities from stochastic analysis by using discrete time (multi-period) models for which general notions from Probability suffice and these are generally familiar to students not only from science courses, but also from economics with quantitative curricula.

There do not exists many textbooks for multi-period models and the present volume is intended to fill in this gap. It deals with the basic topics in financial mathematics and, for each topic, there is a theoretical section and a problem section. The latter includes a great variety of possible problems with complete solution.

Andrea Pascucci is Professor of Financial Mathematics at the University of Bologna where he is also director of a master in Math Finance. His research interests include partial differential equations and stochastic analysis with applications to finance, with a special focus on option pricing, volatility modeling and analytical methods.

Wolfgang Runggaldier is Professor in Probability at the University of Padova. His research interests are in the general area of stochastic dynamical systems and, since about twenty years, mainly in financial mathematics. In this latter area he has been conducting extensive research, lecturing in various places, supervising students, organizing meetings and workshops and taking part in editorial boards.

“The authors present a textbook for a course in financial mathematics at the bachelor level. … It presents a plethora of highly instructive problems/exercises and their solutions, enabling the reader to acquire a confident practical working knowledge of the material. These advantages make the book exceptionally valuable for students; moreover, since the setup of the book is the one used in industry applications of mathematical finance, it can be a very useful read for practitioners interested in the theoretical aspects of the applied methods.” (Tamás Mátrai, Zentralblatt MATH, Vol. 1247, 2012)