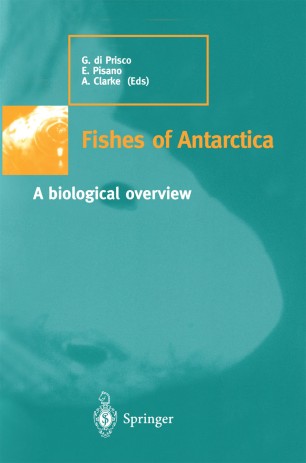 The Antarctic fish fauna has evolved over a long period of geographic and climatic isolation. In the course of this evolution, Antarctic fish have developed specialized adaptations, some of which characterize these organisms as unique. In strong contrast to the continental shelf faunas elsewhere, the Antarctic shelf ichthyofauna is dominated by a single highly endemic group, the Notothenioidei. This group of perciform fish probably first appeared and diversified in the early Tertiary. The development of the Polar Front (referred to as the Antarctic Convergence in the older literature) resulted in a natural oceanographic barrier to migration in either direction, and thus became a key factor in the evolution of Antarctic fish. The dominance of the Antarctic continental shelf fauna by a single taxonomic group of fish provides a simplified natural laboratory for exploring the wealth of physiological, biochemical and ecological adaptations that characterize the fauna. Understanding of the patterns of adaptation in this highly specialized group of fish can tell us much about of evolution.