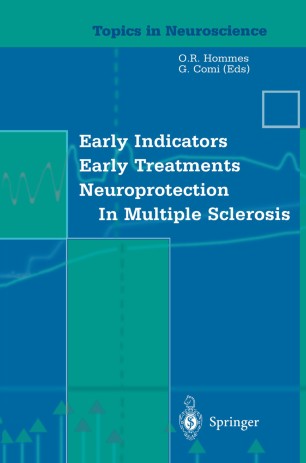 Part of the Topics in Neuroscience book series (TOPNEURO)

There is now evidence that irreversible brain damage accumulates very early in the course of multiple sclerosis. This book reviews the main neurobiological, magnetic resonance imaging, and clinical aspects of the early phases of the dis­ ease. Mechanisms ofirreversible axonal damage and the role played by the inter­ action of glia and the axon are highlighted. In contrast to what was believed for a long time, the sufficient availability of oligodendrocyte precursor cells to promote remyelination in acute lesions has now been demonstrated. For reasons not understood, this remyelination process fails or does not start, particularly in the chronic stages ofthe disease. These findings emphasize the importance of the "milieu" changes induced by an inflammatory process in limiting remyelination. However, first indications are that part of this inflammatory process may have a neuroprotective effect. Pathological studies in multiple sclerosis have now clearly demonstrated that destructive processes may be followed by recovery phases in such a way that myelin may be morphologically and functionally reconstituted. These findings provide the rationale for early treatment and emphasize the importance of clinical trials in early multiple sclerosis. Early treatment is one of the most important aspects in multiple sclerosis today.