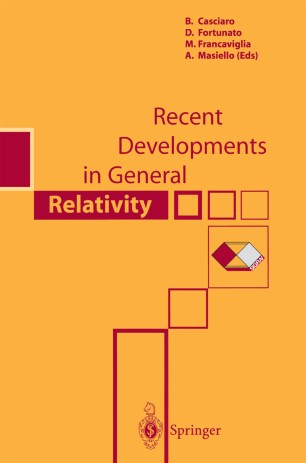 The 13th Italian Conference on General Relativity and Gravitational Physics was held in Cala Corvino-Monopoli (Bari) from September 21to September 25, 1998. The Conference, which is held every other year in different Italian locations, has brought together, as in the earlier conferences in this series, those scientists who are interested and actively work in all aspects of general relativity, from both the mathematical and the physical points of view: from classical theories of gravitation to quantum gravity, from relativistic astrophysics and cosmology to experiments in gravitation. About 70 participants came from Departments of Astronomy and Astrophysics, Departments of Mathematics and Departments of Experimental and Theoretical Physics from all over the Country; in addition a few Italian scientists working abroad kindly accepted invitations from the Scientific Committee. The good wishes of the University and of the Politecnico di Bari were conveyed by the director of Diparti­ mento Interuniversitario di Matematica, Prof. Franco Altomare. These proceedings contain the contributions of the two winners of the SIGRAV prizes, the invited talks presented at the Conference and most of the contributed talks. We thank all of our colleagues, who did their best to prepare their manuscripts. The pleasant atmosphere induced by the beauty of the place was greatlyenhanced not only by the participation of so many colleagues, who had lively discussions about science well beyond Conference hours, but also by the feeling of hospitalityextended to the participants by the staff of the Cala Corvino Hotel, where the Conference was held.