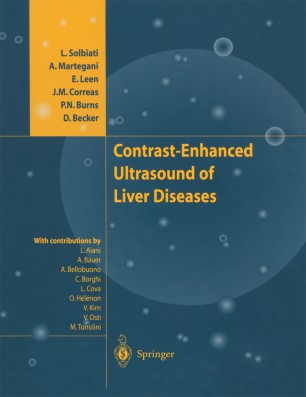 In the last few years, the development of sonographic contrast agents - or "microbubbles" - has stimulated increasingly intensive studies on the rela­ tionships between ultrasound and contrast media. As a result, "contrast -spe­ cific" hardware and software systems have been introduced by different ultra­ sound manufacturers with impressive speed. This has finally led to the birth of a very new imaging modality -"contrast-enhanced sonography" (CEUS). Since 1999, the introduction of second-generation contrast agents has represented a decisive step towards the extensive clinical use of CEUS and has simultaneously made obsolete most, if not all, scientific publications available so far. This book is, to our knowledge, the first to deal entirely with second­ generation contrast agents and the most updated contrast-specific software for noncardiologic uses. The reasons why the liver has been chosen as the only "target" of the book are easily understandable by radiologists and hepatologists alike. The study of vascularity is the only purpose of CEUS, and the liver has a unique vascular system, with two different inflow systems resulting in a single outflow. Furthermore, the pathologically different focal liver lesions (FLLs) are mostly characterized by different "models" of vascularity: CEUS can mimic contrast­ enhanced computed tomography and magnetic resonance imaging, basing differential diagnosis on the morphological and temporal characteristics of enhancement, but with the additional unique advantage of the study being done in real-time.