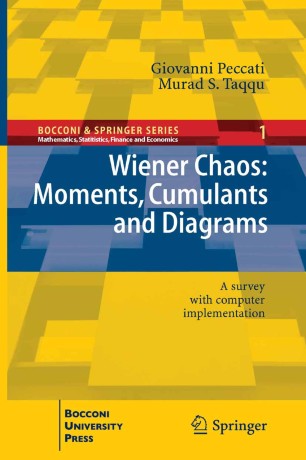 A survey with computer implementation

The concept of Wiener chaos generalizes to an infinite-dimensional setting the properties of orthogonal polynomials associated with probability distributions on the real line. It plays a crucial role in modern probability theory, with applications ranging from Malliavin calculus to stochastic differential equations and from probabilistic approximations to mathematical finance. This book is concerned with combinatorial structures arising from the study of chaotic random variables related to infinitely divisible random measures. The combinatorial structures involved are those of partitions of finite sets, over which Möbius functions and related inversion formulae are defined. This combinatorial standpoint (which is originally due to Rota and Wallstrom) provides an ideal framework for diagrams, which are graphical devices used to compute moments and cumulants of random variables. Several applications are described, in particular, recent limit theorems for chaotic random variables. An Appendix presents a computer implementation in MATHEMATICA for many of the formulae.