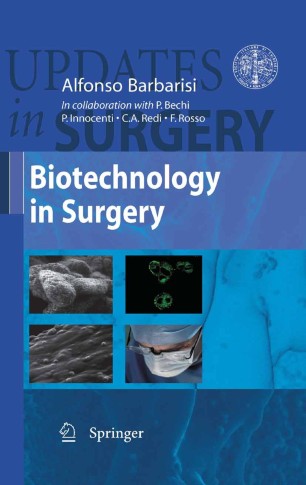 Part of the Updates in Surgery book series (UPDATESSURG, volume 0)

The 20th century has finished, the century when surgery took huge steps forward thanks to progress in technology. Now we have entered the "century of biotechnologies", which will not only generate progress in surgery, but also lead to a real "cultural revolution" that will completely change approaches to solving different problems in medicine.

The aim of this book is to bring surgeons closer to biotechnologies and to overcome the cultural gap dividing them from these new approaches. Biotechnologies are already proposed and used at different levels in surgical practice: in diagnostic technique, enabling practitioners to identify diseases at an early stage and follow their molecular modification over time; and in tissue engineering, where the use of "smart scaffolds" offers a possible answer to increasing demand for biocompatible tissues and organs in transplantation surgery.

This volume focuses on the emerging field of stem cells, analyzing both their role as possible players in originating and perpetuating cancer – "cancer stem cells" – and, conversely, their extraordinary therapeutical potential. An additional section is dedicated to the evaluation and application of derived molecular factors that can enhance the physiological processes that are fundamentally important in surgery, such as hemostasis and wound healing.

Surgeons have always been technologists, in the sense that since surgery began they have always needed technology, beginning with a scalpel and surgical instruments. They have always cooperated with technologists. However, in the new century, the first one of the millennium, a rapid increase in knowledge that is outside the realm of the surgeon’s traditional technological training is imposing itself – hence the aim of this book.

It is now urgent to encourage surgeons to embrace this knowledge (biotechnology) with confidence. By its very nature, biotechnology is completely different from the technologies used so far, because it escapes the senses of sight and touch, which up to now have been the essence of the surgeon’s work.

The cellular and molecular dimensions of biotechnologies are still far removed from most of the recent advances in modern surgical techniques. A common language between surgeons and biotechnologists will create further, revolutionary, progress in surgical sciences in the twenty-first century.