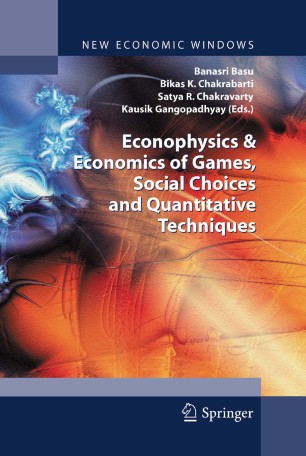 Econophysics and Economics of Games, Social Choices and Quantitative Techniques

The combined efforts of the Physicists and the Economists in recent years in analyzing and modelling various dynamic phenomena in monetary and social systems have led to encouraging developments, generally classified under the title of Econophysics. These developments share a common ambition with the already established field of Quantitative Economics. This volume intends to offer the reader a glimpse of these two parallel initiatives by collecting review papers written by well-known experts in the respective research frontiers in one cover.

This massive book presents a unique combination of research papers contributed almost equally by Physicists and Economists. Additional contributions from Computer Scientists and Mathematicians are also included in this volume. The book consists of two parts: the first part concentrates on Econophysics problems and the second part stresses on various quantitative issues in Economics. Both parts specialize on frontier problems in Games and Social Choices.

Banasri Basu is an Associate Professor at the Physics and Applied Mathematics Unit in the Indian Statistical Institute. The areas of her research interests include field theory of condensed matter systems, non-commutative quantum mechanics and entanglement in spin systems and she has in her credit about fifty scientific articles in international reputed journals, such as, Phys. Rev. B, J. Math. Phys., Eur. Phys. Lett., Phys. Lett. A. Recently, she is working in the empirical avenues in Econophysics.

Satya R. Chakravarty is a Professor in the Economic Research Unit of the Indian Statistical Institute, Kolkata. Since 1984 he has been associated with various research and teaching positions with the Indian Statistical Institute. He has published scores of research papers in many internationally known journals, including, Journal of Economic Theory, Econometrica, Games and Economic Behavior, Economic Theory, International Economic Review, Social Choice and Welfare, Journal of Development Economics, Canadian Journal of Economics, Mathematical Social Sciences, Theory and Decision and Review of Income and Wealth . He has authored four books-Ethical Social Index Numbers, Issues in Industrial Economics and Inequality, Polarization and Poverty: Advances in distributional Analysis and Microeconomics. His research interests lie in social choice, measurement of inequality, poverty and well-being, game theory, industrial organization and microeconomics. He has acted as an external adviser to the World Bank and as an adviser to the National Council of Social Policy Evaluation, Mexico. Prof. Chakravarty was awarded the Mahalanobis Memorial Prize in 1994 by the Indian Econometric Society.

Kausik Gangopadhyay has received his Ph.D. degree in Economics from the University of Rochester. He is currently a Visiting Scientist at the Economic Research Unit in the Indian Statistical Institute, Kolkata.