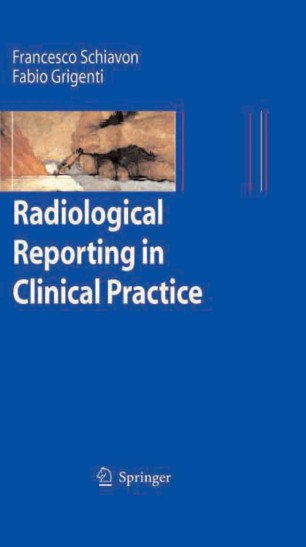 Due to the diverse diagnostic imaging techniques available (X-ray/computed tomography, magnetic resonance, nuclear medicine, ultrasonography), radiologic examinations are composed of an enormous amount of images, which means that the elements to be described and interpreted by the radiologist are sometimes exorbitant. Furthermore, expectations of the population and physicians requiring examinations are growing, so that besides patients, so-called clients (i.e., presumably healthy people) also flow into everyday clinical practice of a radiology department based on disease prevention/screening programs. Registration and interpretation/reporting modules of a computer-assisted radiologic reporting system were created to help the radiologist in his or her task. However, the radiologist is also expected to write a report with diversified language according to diagnostic technique(s), population type (client vs. patient, pediatric, adult, geriatric), pathology, and across all anatomical areas. In this book, the authors suggest a shared methodology to bring – as much as possible – uniformity to radiologic report writing to most effectively communicate the results of an examination. The important role played by language from a legal-forensic aspect is also considered.