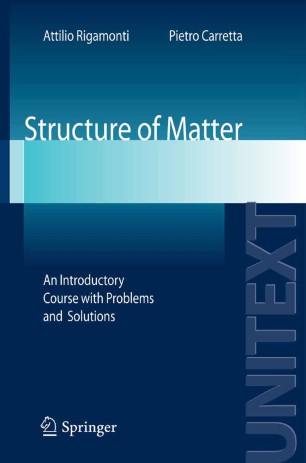 An Introductory Course with Problems and Solutions

This is the second edition of this textbook, the original of which was published in 2007.

Initial undergraduate studies in physics are usually in an organized format devoted to elementary aspects, which is then followed by advanced programmes in specialized fields. A difficult task is to provide a formative introduction in the early period, suitable as a base for courses more complex, thus bridging the wide gap between elementary physics and topics pertaining to research activities. This textbook remains an endeavour toward that goal, and is based on a mixture of simplified institutional theory and solved problems. In this way, the hope is to provide physical insight, basic knowledge and motivation, without impeding advanced learning.

The choice has been to limit the focus to key concepts and to those aspects most typical of atoms, molecules and compounds, by looking at the basic, structural components, without paying detailed attention to the properties possessed by them. Problems are intertwined with formal presentations of the arguments presented, designed as an intrinsic part of the pathway by which the student should move in order to grasp the key concepts.

The purpose of the blend of intuition–theory exercises in this text is to favour the acquisition of basic knowledge in the wide and wonderful field of condensed matter, with an emphasis on how phenomenological properties originate from the microscopic, quantum features of nature.

The text has been completely revised. The subject index has been considerably extended and some figures amended in order to help the reader to better perceive the physical issues. However, the general purpose of this text remains the same as in the first edition.

Attilio Rigamonti is full professor of Structure of Matter at the University of Pavia since 1976. Has given courses, lectures and seminars at many Universities, in Europe and in U.S, at international schools and congresses, as invited speaker. Supervisor of international research projects, member of Academies and scientific committees, Referee for international journals, has been requested to collaborate in books by Academic Press and Springer Verlag and by Institute of Physics for Advances in Physics and for Reports of Progress in Physics. Author of more than 200 papers published on the most important scientific journals and textbooks. Research fields include liquids, polymers and gels; ferroelectric and structural transitions; disorder, non-linearity and incommensuration effects; paramagnets, antiferromagnets and spin dynamics; high temperature superconductivity and superconducting fluctuations. Experimental techniques of expertise are pulsed NMR and NQR in solids; EPR and Mossbauer spectroscopies; dielectric and magnetic susceptibility.

Pietro Carretta is Associate Professor of Physics of Matter at the University of Pavia since 2001. Has given courses, lectures and seminars both in Italy and abroad. Has been member of the scientific and organizing committee of several conferences, member of the steering committee of European facilities and programmes, Referee for many international journals and international institutions. Author of about 100 manuscripts in peer reviewed international journals, including review articles for Reports for Progress in Physics and book chapters. Has been Principal Investigator of national projects. His research activity was basically experimental and mainly concerned the application of NMR-NQR and muSR to the study of high-Tc superconductors, one-dimensional organic conductors, magnetic clusters and one and two-dimensional quantum antiferromagnets.

"This highly recommended textbook builds bridges between elementary physics and research activities. Its main strength lies in its mixture of simplified theory in the main text and deeper exploration in the solved problems. It addresses key concepts and typical aspects of atoms, molecules and solids. … The numerous graphs and problems with solutions make this book particularly useful for self-studying an extremely wide scope of the structure of matter." (Peter Enders, Optics and Photonics News, February, 2008)