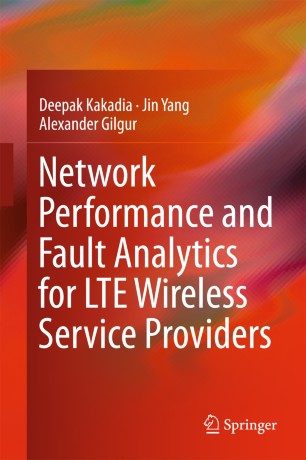 This book is intended to describe how to leverage emerging technologies big data analytics and SDN, to address challenges specific to LTE and IP network performance and fault management data in order to more efficiently manage and operate an LTE wireless networks. The proposed integrated solutions permit the LTE network service provider to operate entire integrated network, from RAN to Core , from UE to application service, as one unified system and correspondingly collect and align disparate key metrics and data, using an integrated and holistic approach to network analysis. The LTE wireless network performance and fault involves the network performance and management of network elements in EUTRAN, EPC and IP transport components, not only as individual components, but also as nuances of inter-working of these components. The key metrics for EUTRAN include radio access network accessibility, retainability, integrity, availability and mobility. The key metrics for EPC include MME accessibility, mobility and capacity, SGW, PGW capacity and connectivity. In the first parts of the book, the authors  describe fundamental analytics techniques, and various key network partitions - RAN, Backhaul, Metro and Core of a typical LTE Wireless Service Provider Network. The second part of the book develops more advanced analytic techniques that can be used to solve complex wireless network problems. The second part of this book also describes practical and novel solutions for LTE service network performance and fault management systems using big data engineering. Self-organizing network (SON) architecture is presented as a way to utilize network performance and fault analytics to enable network automation. SON can significantly improve operational efficiencies and speed up network deployment. This book provides various ways to leverage data science to more intelligently and reliably to automate and manage a wireless network. The contents of the book should be useful to professional engineers and networking experts involved in LTE network operations and management. The content will also be of interest to researchers, academic and corporate, interested in the developments in fault analytics in LTE networks.

Deepak Kakadia is currently at Google in Mountain View CA, working in the area of SDN Network and Analytics. Previously, from January 2013 to January 2015, he was Team Lead, Distinguished Member of Technical Staff (DMTS), IP Network Architect, with Verizon Labs, leading Network QoS Analytics and Network QoS Optimization for LTE Wireless Network Service Provider Networks in Palo Alto, CA. May 2005 to Jan 2013 he was with Verizon / Verizon Wireless, in the Head Quarters Network Planning Group in Walnut Creek, California USA since. Previously he was a Staff Engineer, IP Network Architect at Sun Microsystems Inc., Menlo Park, California, for a total of 11 years since 1994. He also worked at Corona Networks as a Principal Engineer in the Network Management Systems group; Digital Equipment Corp, where he worked on DEC OSF/1; and Nortel Networks (Bell Northern Research) in Ottawa, Canada. He received a certificate in Networking from the Dept of Electrical Engineering at Stanford University, Palo Alto, CA. He received a Bachelor of Engineering in Computer Systems, a Master of Science in Computer Science, and has completed Ph.D. qualifiers and course work in Computer Science. Deepak is a recognized industry expert in networking architecture and analysis, invited speaker at many international conferences, where he was approached by Springer to write a book on this subject. He has authored at time of writing, 39 awarded patents and filed over 70 patents in the area of Network and Systems Management and Wireless Technologies.

Jin Yang received her B.Sc. (Honors), and Ph.D. degrees from Tsinghua University. Dr. Jin Yang is a Fellow at Verizon Communications, responsible for wireless technology and strategy. She is leading next generation wireless network architecture and technologies, including self-organizing network, machine type communications, heterogeneous network, LTE-advanced and 5G access technologies. She has played a key role in development and commercialization of LTE network in 2010, Verizon’s choice of LTE as 4G technology in 2007, various CDMA network developments since 1995 at Verizon, Vodafone and AirTouch Communications. She has managed the development of CDMA design and planning tool at AirTouch. Dr. Jin Yang was an adjunct professor at Portland State University where she taught wireless communications. She has contributed to establish US IS-95 CDMA standards. Dr. Jin yang has more than 35 granted patents and 30 pending patents on wireless communications. She has published numerous papers, and co-authors of 3 published books.

Alexander Gilgur is a Data Scientist and Systems Analyst with over 20 years of experience in a wide variety of domains - Control Systems, Chemical Industry, Aviation, Semiconductor manufacturing, Information Technologies, and Networking. He received his M.S. in Electrical Engineering from Moscow Institute of Chemical Engineering and M.S. in Sport Psychology from Capella University. He has completed Six Sigma Black Belt certification requirements and holds a Professional Engineering license for Chemical Engineering. Alexander has authored and co-authored a number of know-hows and published numerous papers and patents. He has a solid track record of implementing his innovations in production and enjoys applying the beauty of mathematics and statistics to solving System Capacity and Performance problems and is interested in non-stationary processes, which make the core of IT problems today. Presently, he is a Network Data Scientist at Facebook. Prior to Facebook, he was a Network Analyst at Google and a faculty member/lecturer for Machine Learning at UC Berkeley's MIDS program. He is also a father and a husband; a skier, a soccer coach, and a music aficionado.