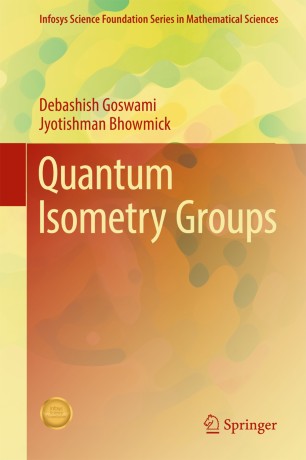 DEBASHISH GOSWAMI is professor at the Stat-Math Unit of the Indian Statistical Institute, Kolkata, since 2011. Earlier, he held the positions of associate professor (2006–11) and assistant professor (2002–06) at the same department. He received his PhD degree from the Indian Statistical Institute, Kolkata, in 2000. After that, he spent couple of years in Germany and Italy for his post-doctoral research. His areas of interest include operator algebras, quantum groups, noncommutative geometry and noncommutative probability. He has published 40 research articles in several premier journals including Communications in Mathematical Physics (Springer), Advances in Mathematics (Springer), Journal of Functional Analysis, Physics Letters A, the Journal of Operator Theory, Transactions of the American Mathematical Society, Mathematische Annalen (Springer). In addition, he has published one book, Quantum Stochastic Processes and Noncommutative Geometry (Cambridge University Press).

He has received numerous awards and academic recognitions for his work, which include Shanti Swarup Bhatnagar Award (2012), J.C. Bose National Fellowship (2016), Swarnajayanthi Fellowship (2009), B.M. Birla Science Prize (2006), the INSA Medal for Young Scientists (2004), the Junior Associateship of I.C.T.P. (Italy) for 2003–07 and the Alexander von Humboldt Fellowship for 2000–01. He has been elected Fellow of the Indian Academy of Sciences (Bangalore) in the year 2015. He has visited several universities and institutes in India and abroad, including Massachusetts Institute of Technology (Cambridge), University of California (Berkeley), Max Planck Institute for Mathematics (Bonn), The Fields Institute (Canada), The Instituto Nacional de Matemática Pura e Aplicada (Brazil), University of Lancaster (England), and The Institute for Research in Fundamental Science (Iran), and delivered invited lectures at many conferences and workshops all over the world.

JYOTISHMAN BHOWMICK is assistant professor at the Stat-Math Unit of the Indian Statistical Institute, Kolkata. He obtained his PhD from the Indian Statistical Institute, Kolkata, in 2010 followed by post-doctoral positions at the Abdus Salam International Centre for Theoretical Physics, Trieste, and the University of Oslo. His research interests include noncommutative geometry and compact quantum groups. He has published several articles in several journals of repute including Communications in Mathematical Physics (Springer), Journal of Noncommutative Geometry, Journal of Functional Analysis, Transactions of the American Mathematical Society, Proceedings of the American Mathematical Society, and so on. He has received the INSA medal for Young Scientists in the year 2015. He is an associate of the Indian Academy of Sciences (Bangalore). His academic visits to foreign universities and institutes include Institut des hautes études scientifiques  (Paris), The Fields Institute (Canada), University of Glasgow (Scotland), etc.

“Several examples and applications are provided, including an explicit description of the quantum isometry groups of most of the noncommutative Riemannian manifolds studied in literature. Introductory sections on the basics of Riemannian geometry noncommutative geometry and quantum groups make the book enjoyable to readers with no previous expertise in the subject.” (Domenico Fiorenza, Mathematical Reviews, April 2018)
“The book gives an up-to date of the results of an analogue of the group of isometries in the framework of noncommutative geometry and quantum groups. A unique feature of this book is the emphasis on the interaction of C-star algebraic compact quantum groups … .The book is an interesting book for the researchers working in this area which is still ‘hot’ enough. The physical motivations and possible applications given in this book are more interesting examples.” (Ahmed Hegazi, zbMATH 1381.81004, 2018)
Buy options