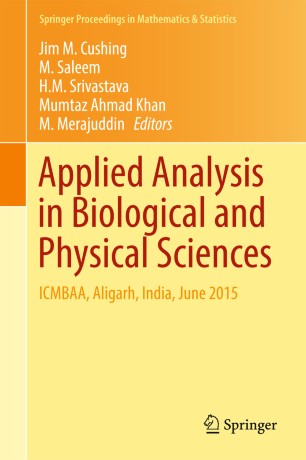 The book contains recent developments and contemporary research in mathematical analysis and in its application to problems arising from the biological and physical sciences. The book is of interest to readers who wish to learn of new research in such topics as linear and nonlinear analysis, mathematical biology and ecology, dynamical systems, graph theory, variational analysis and inequalities, functional analysis, differential and difference equations, partial differential equations, approximation theory, and chaos.
All papers were prepared by participants at the International Conference on Recent Advances in Mathematical Biology, Analysis and Applications (ICMBAA-2015) held during 4–6 June 2015 in Aligarh, India. A focal theme of the conference was the application of mathematics to the biological sciences and on current research in areas of theoretical mathematical analysis that can be used as sophisticated tools for the study of scientific problems. The conference provided researchers, academicians and engineers with a platform that encouraged them to exchange their innovative ideas in mathematical analysis and its applications as well as to form interdisciplinary collaborations.
The content of the book is divided into three parts: Part I contains contributions from participants whose topics are related to nonlinear dynamics and its applications in biological sciences. Part II has contributions which concern topics on nonlinear analysis and its applications to a variety of problems in science, engineering and industry. Part III consists of contributions dealing with some problems in applied analysis.