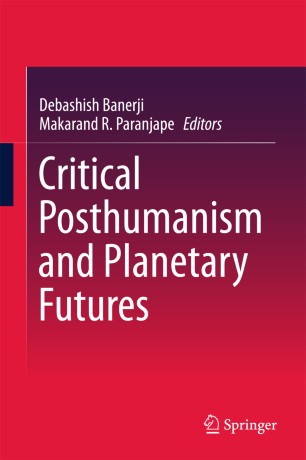 This volume is a critical exploration of multiple posthuman possibilities in the 21st century and beyond. Due to the global engagement with advanced technology, we are witness to a species-wise blurring of boundaries at the edge of the human. On the one hand, we find ourselves in a digital age in which human identity is being transformed through networked technological intervention, a large part of our consciousness transferred to "smart" external devices. On the other hand, we are assisted—or assailed—by an unprecedented proliferation of quasi-human substitutes and surrogates, forming a spectrum of humanoids with fuzzy borders. Under these conditions, critical posthumanism asks, who will occupy and control our planet: Will the "superhuman" merely serve as another sign under which new regimes of dominance are spread across the earth? Or can we discover or invent technologies of existence to counter such dominance? It is issues such as these which are at the heart of this new volume of explorations of the posthuman. The essays in this volume offer leading-edge thought on the subject, with special emphases on postmodern and postcolonial futures. They engage with questions of subalternity and feminism vis-à-vis posthumanism, dealing with issues of subjugation, dispensability and surrogacy, as well as the possibilities of resistance, ethical politics or subjective transformation from South Asian archives of cultural and spiritual practice. This volume is a valuable addition to the on-going global dialogues on posthumanism, indispensable to those, from across several disciplines, who are interested in postcolonial and planetary futures.

Debashish Banerji is Haridas Chaudhuri Professor of Indian Philosophies and Cultures and Doshi Professor of Asian Art at the California Institute of Integral Studies, San Francisco. He has curated a number of exhibitions on Indian and Japanese Art and has written extensively on philosophy, art history, culture studies, postcolonialism and posthumanism. He is the author of The Alternate Nation of Abanindranath Tagore (SAGE, 2010) and Seven Quartets of Becoming: A Transformative Yoga Psychology Based on the Diaries of Sri Aurobindo (DKPW, 2012).

Makarand R. Paranjape is Professor of English at Centre for English Studies, School of Language, Literature and Culture Studies, Jawaharlal Nehru University, New Delhi. He served as the inaugural Indian Council for Cultural Relations (ICCR) Chair in Indian Studies at the National University of Singapore (2010–11). His recent publications include Making India: Colonialism, National Culture, and the Afterlife of Indian English Authority (2013); Another Canon: Indian Texts and Traditions in English (2010); and Altered Destinations: Self, Society and Nation in India (2009). He is the Principal Investigator of an internationally funded project on “Science and Spirituality in India.”