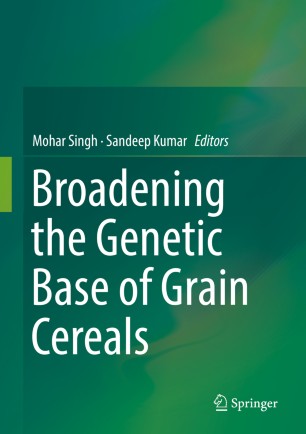 Broadening the Genetic Base of Grain Cereals

This book offers comprehensive coverage of important grain cereals including their origin and distribution, crop gene pool, level of diversity, production constraints, traits of importance for genetic base widening, crop improvement methodologies, genome mapping, genomics for breeding, and future strategies. The chapters, contributed by eminent crop researchers from around the world, provide rare insights into the crop-specific constraints and prospects drawing from their substantial experience. As such, the book offers an essential source of information for grain cereals scientists, teachers, students, policy planners and developmental experts alike.

Grain cereals, which comprise rice, wheat, maize, barley, oats, sorghum and millets, are members of the grass family. These crops are vital to human nutrition, thanks to their roles as staple food crops in different parts of the globe. Some of them are rich sources of carbohydrates, which provide energy, while others are important sources of minerals, vitamins and proteins, in addition to their medicinal properties. In most cereals, the existing variability among elite germplasm has been exploited to attain a desirable level of productivity. However, to make further breakthroughs in enhancing yield and improving stability in future crop cultivars, new sources of genes/alleles need to be identified in wild/weedy species and incorporated into the cultivated varieties. Though there have been many publications on various aspects of grain cereal improvement in the recent past, to date this essential information has remained scattered among different periodicals.

Dr. Mohar Singh is currently working as Senior Scientist (Plant Breeding) at the National Bureau of Plant Genetic Resources Regional Station in Shimla, India. Dr. Singh received his doctoral degree in Plant Breeding from the Himachal Pradesh Agricultural University in Palampur, India. He has been working on the genetic and genomic resources of pulses, cereals and potential crops for the last several years. He has identified several useful gene sources for various traits of interest in wild Cicer and Lens species, some of which have since been introgressed into the cultivated background for diversification of the cultivated gene pool.  Dr. Singh has published more than fifty research papers in journals of national and international repute, including Plant Breeding, Crop Science, Euphytica, PLoS ONE, DNA Research, Journal of Agricultural Science, Journal of Genetics and Breeding, Genetic Resources and Crop Evolution, Plant Genetic Resources: Characterization and Utilization, and Adv Hort Science, and also has two textbooks and three edited books to his credit.

Dr. Sandeep Kumar is presently working as Senior Scientist (Biochemistry) at the Germplasm Evaluation Division, National Bureau of Plant Genetic Resources (NBPGR), an institute of the Indian Council of Agricultural Research (ICAR), New Delhi since December 22, 2010. Earlier, he worked as a Scientist (Biochemistry) at the Directorate of Rapeseed-Mustard Research, Sewar, Bharatpur, which is also an institute of the ICAR. He received his master’s and doctoral degrees in Biochemistry from Chaudhary Charan Singh Haryana Agricultural University, Hisar, Haryana. He has substantial experience in teaching various graduate and postgraduate courses at SBS PGI, Balawala, Dehradun and graduate courses at D.N. College, Hisar. He has also researched biochemical aspects in various groups of crops including cereals, oilseeds and forages. Presently, his research focuses on the nutritional and other biochemical aspects of cereals and oilseeds. He has to his credit one book as co-editor and more than 45 scientific publications published in journals of national and international repute.