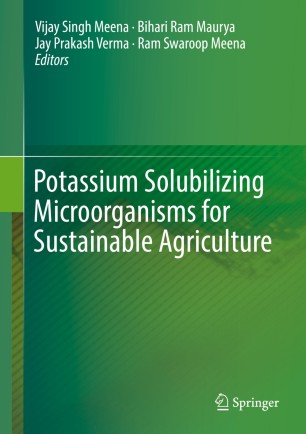 The potassium solubilizing microorganisms (KSMs) are a rhizospheric microorganism which solubilizes the insoluble potassium (K) to soluble forms of K for plant growth and yield. K-solubilization is carried out by a large number of saprophytic bacteria (Bacillus mucilaginosus, B. edaphicus, B. circulans, Acidothiobacillus ferrooxidans, Paenibacillus spp.) and fungal strains (Aspergillus spp. and Aspergillus terreus). Major amounts of K containing minerals (muscovite, orthoclase, biotite, feldspar, illite, mica) are present in the soil as a fixed form which is not directly taken up by the plant.

Nowadays most of the farmers use injudicious application of chemical fertilizers for achieving maximum productivity. However, the KSMs are most important microorganisms for solubilizing fixed form of K in soil system. The KSMs are an indigenous rhizospheric microorganism which show effective interaction between soil-plant systems. The main mechanism of KSMs is acidolysis, chelation, exchange reactions, complexolysis and production of organic acid. According to the literature, currently negligible use of potassium fertilizer as chemical form has been recorded in agriculture for enhancing crop yield. Most of the farmers use only nitrogen and phosphorus and not the K fertilizer due to unawareness that the problem of K deficiency occurs in rhizospheric soils. The K fertilizer is also costly as compared to other chemical fertilizers.