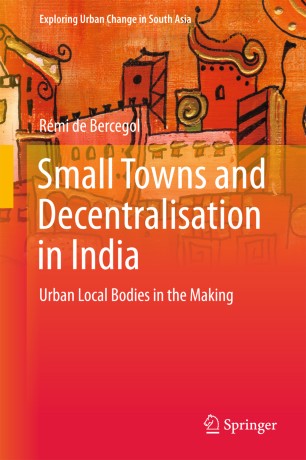 Small Towns and Decentralisation in India

Urban Local Bodies in the Making

Although considered home to one of the oldest urban civilisations, India remains one of the least urbanised regions in the world. At the same time, the country has many million-strong metropolises that are among the world’s largest megacities, as well as a multitude of small and medium-sized towns and cities. This paradoxical urbanisation, against a backdrop of reforms, has interested the scientific community to gain a more nuanced understanding of the changes and challenges involved. This book analyses an urban environment often overlooked by researchers and public authorities, namely, that of small towns. These towns are of vital importance as this is where the bulk of future urban development will take place. However, decades after implementation of the reforms, the majority of reviews and assessments have focused on large cities and so the impacts of the reform on small towns are still poorly understood. This book includes extensive primary data about political, technical and financial municipal issues in small towns of northern India and, is therefore, of interest to students, researchers and planners working on urban and regional studies in the global South.