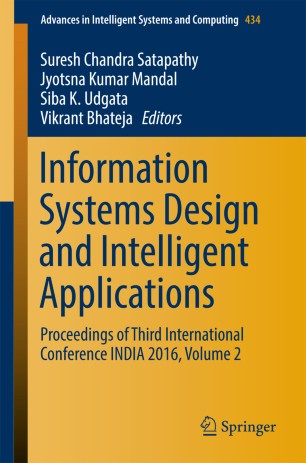 Part of the Advances in Intelligent Systems and Computing book series (AISC, volume 434)

The third international conference on INformation Systems Design and Intelligent Applications (INDIA – 2016) held in Visakhapatnam, India during January 8-9, 2016. The book covers all aspects of information system design, computer science and technology, general sciences, and educational research. Upon a double blind review process, a number of high quality papers are selected and collected in the book, which is composed of three different volumes, and covers a variety of topics, including natural language processing, artificial intelligence, security and privacy, communications, wireless and sensor networks, microelectronics, circuit and systems, machine learning, soft computing, mobile computing and applications, cloud computing, software engineering, graphics and image processing, rural engineering, e-commerce, e-governance, business computing, molecular computing, nano-computing, chemical computing, intelligent computing for GIS and remote sensing, bio-informatics and bio-computing. These fields are not only limited to computer researchers but also include mathematics, chemistry, biology, bio-chemistry, engineering, statistics, and all others in which computer techniques may assist.

Dr. Suresh Chandra Satapathy is currently working as Professor and Head, Department of Computer Science and Engineering, Anil Neerukonda Institute of Technology and Sciences (ANITS), Vishakhapatnam, Andhra Pradesh, India. He obtained his PhD in Computer Science Engineering from JNTUH, Hyderabad and Master degree in Computer Science and Engineering from National Institute of Technology (NIT), Rourkela, Odisha. He has more than 27 years of teaching and research experience. His research interest includes machine learning, data mining, swarm intelligence studies and their applications to engineering. He has more than 98 publications to his credit in various reputed international journals and conference proceedings. He has edited many volumes from Springer AISC and LNCS in past and he is also the editorial board member in few international journals. He is a senior member of IEEE and Life Member of Computer society of India. Currently, he is the National Chairman of Division-V (Education and Research) of Computer Society of India.

Dr. J.K. Mandal has M.Sc. in Physics from Jadavpur University in 1986, M.Tech. in Computer Science from University of Calcutta. He was awarded PhD. in Computer Science & Engineering by Jadavpur University in 2000. Presently, he is working as Professor of Computer Science & Engineering and former Dean, Faculty of Engineering, Technology and Management, Kalyani University, Kalyani, Nadia, West Bengal for two consecutive terms. He started his career as lecturer at NERIST, Arunachal Pradesh in September, 1988. He has teaching and research experience of 28 years. His areas of research include coding theory, data and network security, remote sensing and GIS based applications, data compression, error correction, visual cryptography, steganography, security in MANET, wireless networks and unify computing. He has produced 11 PhD degrees, three submitted (2015) and 8 are ongoing. He has supervised 3 M.Phil and 30 M.Tech thesis. He is life member of Computer Society of India since 1992, CRSI since 2009, ACM since 2012, IEEE since 2013 and Fellow member of IETE since 2012, Executive member of CSI Kolkata Chapter. He has delivered invited lectures and acted as program chair of many international conferences and also edited 9 volumes of proceedings from Springer AISC series, CSI 2012 from McGraw-Hill, CIMTA 2013 from Procedia Technology, Elsevier. He is reviewer of various International Journals and Conferences. He has over 355 articles and 5 books published to his credit.

Dr. Siba K. Udgata is a Professor of School of Computer and Information Sciences, University of Hyderabad, India. He is presently heading Centre for Modelling, Simulation and Design (CMSD), a high performance computing facility at University of Hyderabad. He has got his Masters followed by Ph.D in Computer Science (mobile computing and wireless communication). His main research interests are Wireless Communication, Mobile Computing, Wireless Sensor Networks and Intelligent Algorithms. He was a United Nations Fellow and worked in the United Nations University/ International Institute for Software Technology (UNU/IIST), Macau as research fellow in the year 2001. Dr. Udgata is working as a principal investigator in many Government of India funded research projects mainly for development of wireless sensor network applications and application of swarm intelligence techniques. He has published extensively in refereed international journals and conferences in India as well as abroad. He was also in the editorial board of many Springer LNCS/LNAI and Springer AISC Proceedings.

Prof. Vikrant Bhateja is Associate Professor, Department of Electronics & Communication Engineering, Shri Ramswaroop Memorial Group of Professional Colleges (SRMGPC), Lucknow and also the Head (Academics & Quality Control) in the same college. His area of research include digital image and video processing, computer vision, medical imaging, machine learning, pattern analysis and recognition, neural networks, soft computing and bio-inspired computing techniques. He has more than 90 quality publications in various international journals and conference proceedings. Prof. Vikrant has been on TPC and chaired various sessions from the above domain in international conferences of IEEE and Springer. He has been the track chair and served in the core-technical/editorial teams for international conferences: FICTA 2014, CSI 2014 and INDIA 2015 under Springer-ASIC Series and INDIACom-2015, ICACCI-2015 under IEEE. He is associate editor in International Journal of Convergence Computing (IJConvC) and also serving in the editorial board of International Journal of Image Mining (IJIM) under Inderscience Publishers. At present he is guest editors for two special issues floated in International Journal of Rough Sets and Data Analysis (IJRSDA) and International Journal of System Dynamics Applications (IJSDA) under IGI Global publications.