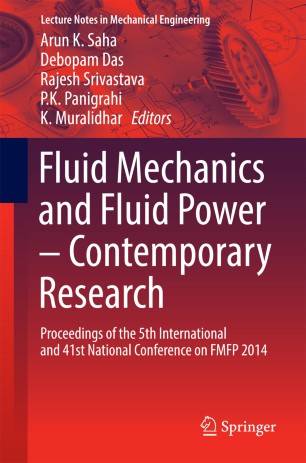 This volume comprises the proceedings of the 42nd National and 5th International Conference on Fluid Mechanics and Fluid Power held at IIT Kanpur in December, 2014.The conference proceedings encapsulate the best deliberations held during the conference. The diversity of participation in the conference, from academia, industry and research laboratories reflects in the articles appearing in the volume.

The contents of this volume will prove useful to researchers from industry and academia alike.

Dr. Arun K Saha (PhD, 1999, IIT Kanpur) has experience in experiments and numerical simulation in fluid mechanics and heat transfer. The numerical and experimental work done by him has helped in improving the fundamental understanding of jets and wakes. Currently he works on active control of flow and heat transfer for drag reduction of vehicles and gas turbine respectively. He is an author of several research publications and chapters in textbooks. He has been with IIT Kanpur since November 2004.
Dr. Debopam Das (PhD, 1998, Indian Institute of Science Bangalore) works in the area of experimental and theoretical fluid mechanics. His research work encompasses both compressible flow and incompressible flow. Compressible flow research is primarily on flow and acoustic field associated with formation of compressible vortex ring and its interaction with shock, wall or other generic shape objects.  Incompressible flow research spans across different topics; transition of unsteady internal flow, free shear and buoyancy driven flows, unsteady aerodynamics of birds' and insects' flights. He has also designed and fabricated several flapping wing flying MAV’s of different sizes including a hovering MAV. In theoretical fluid dynamics, he has contributed towards an analytical solution method for unsteady internal flow when the pressure as well as the velocity is unknown. He is author of several research publications. He has been at IIT Kanpur since December 2001.
Dr. Rajesh Srivastava has worked extensively on numerical simulation of flow and transport through variably saturated porous media. His work provides significant insight into the transport of reactive solutes in porous media. His research finds applications in remediation of contaminated sites as well as mining of minerals through heap leaching. His present work focuses on the effect of climate change on water resources and inverse techniques for characterization of porous media and identification of possible contaminant sources. He is an author of several research publications and two textbooks. He has been at IIT Kanpur since December 1997.
Dr. P. K. Panigrahi is presently working as Professor and Head in the Mechanical Engineering Department, IIT Kanpur. Previously, he was the Head of the Laser Technology Program. He obtained his MS and Ph.D. from LSU, Baton Rouge, USA. His research interests include development and implementation of optical techniques for characterization of transport processes in various devices/systems at macro-scale and micro-scale involving fluid flow, heat and mass transfer.

Dr. Muralidhar (PhD, 1985, University of Delaware) has conducted a wide spectrum of experiments and numerical simulation in fluid mechanics and heat transfer. He has contributed to the understanding of transport phenomena in porous media, wave dynamics, in addition to development of numerical algorithms and laser measurement of flow and thermal fields. His research finds applications in industrial processes such as enhanced oil recovery, methane hydrates and CO2 sequestration, regenerators, and growth of optical crystals. His present work relates to interfacial transport, biomedical imaging and inverse techniques. He is an author of several research publications, textbooks and monographs. He has been at IIT Kanpur since July 1987.