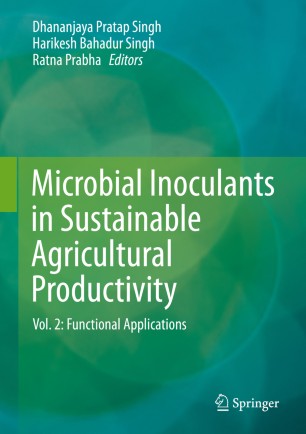 The performance of crops in the soil largely depends on the physico-chemical components of the soil, which regulate the availability of nutrients as well as abiotic and biotic stresses. Microbes are the integral component of any agricultural soil, playing a vital role in regulating the bioavailability of nutrients, the tolerance to abiotic and biotic stresses and management of seed-borne and soil-borne plant diseases. The second volume of the book Microbial Inoculants in Sustainable Agricultural Productivity - Functional Applications reflects the pioneering efforts of eminent researchers to explore the functions of promising microbes as microbial inoculants, establish inoculants for field applications and promote corresponding knowledge among farming communities.

In this volume, readers will find dedicated chapters on the role of microbes as biofertilizers and biopesticides in the improvement of crop plants, managing soil fertility and plant health, enhancing the efficiency of soil nutrients and establishing systemic phytopathogen resistance in plants, as well as managing various kinds of plant stress by applying microbial inoculants. The impact of microbial inoculants on the remediation of heavy metals, soil carbon sequestration, function of rhizosphere microbial communities and remediation of heavy metal contaminated agricultural soils is also covered in great detail.

In this Volume, a major focus is on the approaches, strategies, advances and technologies used to develop suitable and sustainable delivery systems for microbial inoculants in field applications. Subsequent chapters investigate the role of nanomaterials in agriculture and the nanoparticle-mediated biocontrol of nematodes. An overview of the challenges facing the regulation and registration of biopesticides in India rounds out the coverage.

Dhananjaya P. Singh is presently Senior Scientist (Biotechnology) with ICAR-National Bureau of Agriculturally Important Microorganisms, Indian Council of Agricultural Research, India at Maunath Bhanjan, India. He did his Masters degree from G.B. Pant University of Agriculture & Technology, Pantnagar, India and Ph. D. in Biotechnology from Banaras Hindu University, India. His research interests lies in bioprospecting of metabolites, microbe-mediated stress management in plants, metabolomics-driven search for small molecules and bioinformatics. He has been engaged with the development of supercomputational infrastructure for agricultural bioinformatics at ICAR-NBAIM under National Agricultural Bioinformatics Grid project of ICAR. He has overall 112 publications including 60 research papers, two edited books, 22 book chapters, 20 popular articles, 15 reviews and one Indian Patent to his credit.

Harikesh B. Singh is presently Professor & Head, Department of Mycology and Plant Pathology at Institute of Agricultural Sciences, Banaras Hindu University. He served the State Agriculture University, Central University and CSIR Institute in teaching, research and extension roles. His major research focus is on bioinnoculats, biological control of plant pathogens and nano-biotechnology. In recognition of Prof. Singh’s scientific contributions and leadership in the field of plant pathology, he was honored;wi

“This volume offered detailed information on mass production of efficient microbial inoculants from laboratory to industrial/commercial level, intellectual property rights required, registration processes, bio-safety and bio-security concerns, quality control, and their legal authenticity. Based on the above merits, we recommend this book to stakeholders engaged in working on microbial bioinoculants.” (Jay Prakash Verma, Frontiers in Microbiology, December, 2016)
Buy options