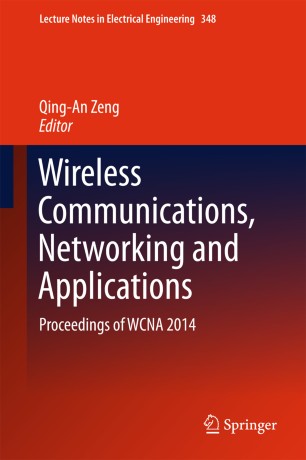 This book is based on a series of conferences on Wireless Communications, Networking and Applications that have been held on December 27-28, 2014 in Shenzhen, China. The meetings themselves were a response to technological developments in the areas of wireless communications, networking and applications and facilitate researchers, engineers and students to share the latest research results and the advanced research methods of the field. The broad variety of disciplines involved in this research and the differences in approaching the basic problems are probably typical of a developing field of interdisciplinary research. However, some main areas of research and development in the emerging areas of wireless communication technology can now be identified. The contributions to this book are mainly selected from the papers of the conference on wireless communications, networking and applications and reflect the main areas of interest: Section 1 - Emerging Topics in Wireless and Mobile Computing and Communications; Section 2 - Internet of Things and Long Term Evolution Engineering; Section 3 - Resource Allocation and Interference Management; Section 4 - Communication Architecture, Algorithms, Modeling and Evaluation; Section 5 - Security, Privacy, and Trust; and Section 6 - Routing, Position Management and Network Topologies.

Dr. Qing-An Zeng received his MS and Ph.D. degrees both in Electrical Engineering from Shizuoka University in Japan. In 1997, he joined NEC Corporation, Japan, where he was engaged in the R&D of 3G systems. In 1999, he joined the University of Cincinnati in Ohio and was a faculty member in the Department of Computer Science. In 2010, Dr. Zeng joined North Carolina A&T State University as a faculty member in the Department of Computer Systems Technology. His research interests include Wireless and Mobile Networks, Handoff and Resource Management, Mobility Management, Heterogeneous Networks, Mobile Ad Hoc and Sensor Networks, Wireless Internet, QoS Issues, Security Issues, UWB, NoC, PLC, Smart Grid Communications, Vehicle Communications, Modeling and Performance Analysis, and Queuing Theory. Dr. Zeng has more than 140 publications including: books, book chapters, refereed journal articles and international conference proceedings papers. He has also served on numerous professional committees. In October 2014, Dr. Zeng published his book entitled “Introduction to Wireless and Mobile Systems, 4th edition” by Cengage Learning. His book has been adopted by a lot of universities in the world and was translated into Chinese and Korean versions. Dr. Zeng is a Senior Member of IEEE.