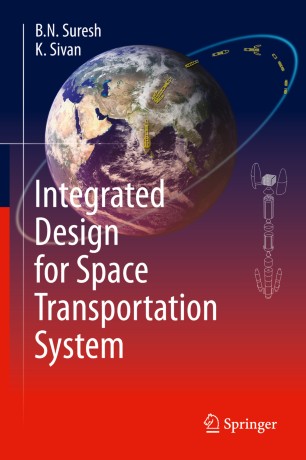 The book addresses the overall integrated design aspects of a space transportation system involving several disciplines like propulsion, vehicle structures, aerodynamics, flight mechanics, navigation, guidance and control systems, stage auxiliary systems, thermal systems etc. and discusses the system approach for design, trade off analysis, system life cycle considerations, important aspects in mission management, the risk assessment, etc. There are several books authored to describe the design aspects of various areas, viz., propulsion, aerodynamics, structures, control, etc., but there is no book which presents space transportation system (STS) design in an integrated manner. This book attempts to fill this gap by addressing systems approach for STS design, highlighting the integrated design aspects, interactions between various subsystems and interdependencies. The main focus is towards the complex integrated design to arrive at an optimum, robust and cost effective space transportation system. The orbital mechanics of satellites including different coordinate frames, orbital perturbations and orbital transfers are explained. For launching the satellites to meet specific mission requirements, viz., payload/orbit, design considerations, giving step by step procedure are briefed. The selection methodology for launch vehicle configuration, its optimum staging and the factors which influence the vehicle performance are summarized. The influence of external, internal and dynamic operating environments experienced by the vehicle subsystems and the remedial measures needed are highlighted. The mission design strategies and their influence on the vehicle design process are elaborated. The various critical aspects of STS subsystems like flight mechanics, propulsion, structures and materials, thermal systems, stage auxiliary systems, navigation, guidance and control and the interdependencies and interactions between them are covered. The design guidelines, complexity of the flight environment and the reentry dynamics for the reentry missions are included. The book is not targeted as a design tool for any particular discipline or subsystem. Some of the design related equations or expressions are not attempted to derive from the first principle as this is beyond the scope of this book. However, the important analytical expressions, graphs and sketches which are essential to provide in-depth understanding for the design process as well as to understand the interactions between different subsystems are appropriately included.

Dr. B.N. Suresh is Vikram Sarabhai Distinguished Professor at ISRO HQ. He is also President, Indian National Academy of Engineering, Delhi; a member of Board of Governors, IIT Madras; and Chairman, Research Board for Aeronautical Development Establishment, DRDO. After his degree in Science and Engineering from Mysore University, he took his Post Graduate degree from IIT Madras. He got his Doctorate under Commonwealth Scholarship in Control Systems from Salford University, UK. He joined Vikram Sarabhai Space Centre, Trivandrum in 1969 and discharged several responsibilities before taking over as Director, Vikram Sarabhai Space Centre and served four and half years till end of November 2007. He took over as Founder Director for the newly established Indian Institute of Space Science and Technology (IIST) at Trivandrum in 2007 and served for three and half years. He was a distinguished scientist and served as member of Space Commission for four years. He was also distinguished Professor at IIT, Bombay and MIT Manipal. His areas of specialization are design of launch vehicles, aerospace navigation guidance and control systems, actuation systems, modelling and simulation and R&D management. He is a Fellow of several Professional Societies like International Academy of Astronautics, Paris, Indian National Academy of Engineering, Astronautical Society of India and Aeronautical Society of India. He was President for System Society of India for 6 years. He was head of Indian delegation in United Nations Committee on Peaceful Uses of Outer Space (UNCOPOUS) at Vienna, Austria for four years till 2007. He also actively participated in International Academy of Astronautics (IAA) and International Astronautical Federation. He was the chairman of the selection board for five years for selecting the members in S and T area for IAA. He was Co-Chair for programme Committee for the conduct of International Astronautical Congress (IAC) in 2007. He has won several awards and honours and prominent among them are “Dr. Biren Roy Space Science Design Award” from Aeronautical Society of India, “Agni Award” from DRDO for achieving the self-reliance, “ASI Award” for contribution to space technologies, by Astronautical Society of India. “Distinguished Alumni Award” from IIT Madras, “Outstanding Achievement Award” by Dept. of Space, Govt. of India, “Lifetime Contribution Award” in engineering by Indian National Academy of Engineering (INAE) for his significant contributions for space technologies, “National Systems Gold Medal” for lifetime contributions to large systems from System Society of India, “Aryabhata Award” by Astronautical Society for his invaluable contributions for aerospace developments and “Karnataka State Rajyotsava Award” for 2014 for Science & Technology, the top award from Government of Karnataka and “MR Kurup Endowment Award” by Centre for Indian Consumers Research, Trivandrum, for outstanding contributions in space education and research in 2015. In recognition of his meritorious contributions for Science and Technology, Govt. of India conferred on him “Padmashree” during the year 2002 and “Padma Bhushan” during the year 2013.

Dr. K. Sivan is a graduate of Madras Institute of Technology and has done Masters in Aerospace at Indian Institute of Science Bangalore. He got his doctorate from Indian Institute of Technology, Bombay. He joined Vikram Sarabhai Space Centre, Thiruvananthapuram in the year 1982 and has worked in PSLV Project and Mission group of Avionics dealing with various aspects of vehicle and mission design. Subsequent to the successful development of PSLV, he held various responsibilities such as Group Director, Mission Synthesis and Simulation Group, Project Director, Re-usable Launch Vehicle Technology Demonstrator Project, Deputy Director of Aeronautics and Structures entity dealing with various aspects of launch vehicle and mission design, testing, validation and flight clearance. He was Project Director, GSLV Project and presently the Director of Liquid Propulsion Systems Centre. He is a Distinguished Scientist having expertise in the areas of Project Management, launch vehicle configuration, mission design, control and guidance design of launch vehicles, aerodynamics design, structural design and mission simulation and testing. His contributions are well recognized by several awards and some of them are “Shri Hari Om Ashram Prerit, Dr. Vikram Sarabhai Research Award” for the year 1999, “ISRO Merit Award” for the year 2007, “Dr. Biren Roy Space Science Award” for the year 2011, “The Distinguished Alumnus Award for 2013” from MIT Alumni Association, Chennai, “Doctor of Science (Honoris Causa)” conferred by Sathyabama University, Chennai for the year 2014. His technical and managerial leadership led to the historical achievement of most successful GSLV flight with indigenous Cryogenic stage, making India proud. He is a fellow of several professional bodies like Indian National Academy of Engineering (INAE), Aeronautical Society of India (AeSI), Astronautical Society of India (ASI) and Systems Society of India (SSI). He held different positions such as Chairman and Vice Chairman of local chapters of these professional bodies. His contribution to space science and technology plays a vital role in the successful launches of India’s launch vehicles.