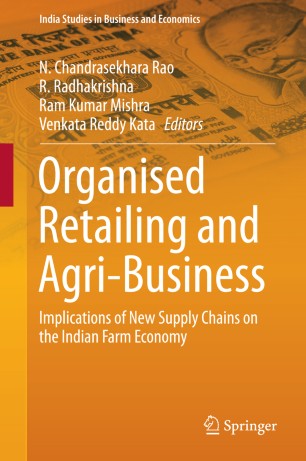 Implications of New Supply Chains on the Indian Farm Economy

This book examines the performance of organized retail chains supplying the agri-input and output services in terms of achieving their objective of utilising collective bargaining power in the marketing of their agricultural produce, integrating empirical experience from India and other selected developing countries. The scenario of marketing for agricultural products has been undergoing rapid changes with the rise of organised retailing (the Indian term for ‘supermarkets’), a process that is likely to accelerate in years to come, with India being on the threshold of a supermarket revolution. In fact, India is referred to as the ‘final frontier’ in the development of supermarkets. The growth of supermarkets in India is faster than that in China, which is also witnessing an exponential growth as part of the “third wave” of supermarket diffusion.

The book investigates the links between organised retailing and farmers and farming in India. Apart from raising issues of equity, inclusion and problems in policy framework, it also discusses policy interventions that are essential in order to make the development of organised retailing more inclusive and beneficial to the farming community and agricultural sector. The book further serves as a guide for policy makers, helping them to select the right kind of interventions to balance growth with equity as market forces penetrate deeper into the agricultural marketing space.

N. Chandrasekhara Rao is currently professor and head of agricultural economics research unit at the Institute of Economic Growth, Delhi. Prior to this, he worked at the Centre for Economic and Social Studies, Hyderabad and the Andhra Pradesh Department of Agriculture for ten years. He was the Fulbright Fellow at Cornell University, Ithaca, NY, USA during 2010-11 academic year. Recipient of Anamitra Saha award for the best research article for 2004 from the Indian Society of Agricultural Economics, his book, Biotechnology in Indian Agriculture: Potential, Performance and Concerns, was published by Academic Foundation, New Delhi in 2010. He has coedited the book, India: Perspectives on Equitable Development, also published by Academic Foundation, New Delhi in 2009. His research interests are development issues of agriculture including supply chain consisting of producers, processors and retailers, new technologies including biotechnology and nanotechnology, food processing and other agro-based industries; poverty reduction and labour market. Currently, he is working on a longitudinal project in four Indian states to understand the nature of diffusion and impacts of supermarket penetration on country's agriculture.

R. Radhakrishna is currently the Chairman and Honorary Professor at the Centre for Economic and Social Studies, Hyderabad and Chairman, Centre for Development Alternatives, Ahmedabad. He worked as the Director of the Centre

for Economic and Social Studies, Hyderabad for ten years before moving to Delhi as the Member Secretary of the Indian council of Social Science Research, New Delhi. Later, he was the Vice-Chancellor of the undivided Andhra University, Visakhapatnam and Director for Indira Gandhi Institute of Development Research, Mumbai for seven years. He was the Chairperson of Madras Institute of Development Studies during 2008-2013. His latest assignment was at the National Statistical Commission, New Delhi as its chairman. He has varied research interests in the field of economics. Considered to be an expert on poverty, food security and nutrition issues, he works on wide ranging issues. Currently, he is the President of the Indian Society of Agricultural Marketing, which brings out the journal Indian Journal of Agricultural Marketing. He was the Conference President of the Indian Society of Labour Economics in 2004 and also of the Indian Econometric Society in 2008. He was Jawaharlal Nehru National Fellow (ICSSR) during 2008-10. He was awarded VKRV Rao Prize in Economics in 1986 and received 'Telugu AtmaGauruvaPuraskaram' in 1988 from the Government of Andhra Pradesh.

R. K. Mishra is Senior Professor, Director and ONGC Subir Raha Chair Professor at the Institute of Public Enterprise, Hyderabad, India. A graduate of International Management Programme, SDA Bocconi, Milan, Italy, he has been a Fellow of British Council and Commonwealth Secretariat. He has had research s

tints at London Business School and Maison Des Sciences De L’ Hommes, Paris. He has taught at the University of Bradford, United Kingdom and was a visiting Professor at Maison Des Sciences De L’ Hommes, Paris. He is a member of the UN Task Force on International Taskforce on Standards of Excellence in Public Administration and Education. He has been a Management Consultant to several organizations including DFID, Deloitte, Adam Smith Institute, ADB and Centre for Good Governance. He is an Honorary Member on the Board of Research, American Biographical Institute, USA.

Venkata Reddy Kata is a Visiting Fellow at the Centre for Economic and Social Studies, Hyderabad and Joint Secretary of Indian Society of Agricultural Marketing. He was the former head of department of applied economics in Andhra University, Visakhapatnam. A doctorate in agricultural economics, Prof. Reddy taught for three decades in the same department. His book Agricultural Production Functions was published by Ajanta Publications, New Delhi in 1990. Besides teaching and supervising several doctoral students, he has undertaken research studies for different organizations including University Grants Commission, Indian Council of Social Science Research, Indira Gandhi Institute of Development Research, Mumbai, National Thermal Power Corporation, and Planning Commission of Government of India. He has published research articles in many of the reputed journals in the field of agricultural econo

mics. Currently, he is working on child nutrition.