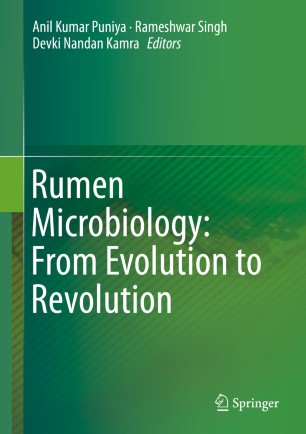 Rumen Microbiology: From Evolution to Revolution

This book offers an in-depth description of different groups of microbes (i.e. bacteria, protozoa, fungi and viruses) that exist in the rumen microbial community, and offers an overview of rumen microbiology, the rumen microbial ecosystem of domesticated ruminants, and rumen microbial diversity. It provides the latest concepts on rumen microbiology for scholars, researchers and teachers of animal and veterinary sciences. With this goal in mind, throughout the text we focus on specific areas related to the biology and complex interactions of the microbes in rumen, integrating significant key issues in each respective area. We also discuss rumen manipulation with plant secondary metabolites, microbial feed additives, utilization of organic acids, selective inhibition of harmful rumen microbes, and ‘omics’ approaches to manipulating rumen microbial functions. A section on the exploration and exploitation of rumen microbes addresses topics including the current state of knowledge on rumen metagenomics, rumen: an underutilized niche for industrially important enzymes, and ruminal fermentations to produce fuels. We next turn our attention to commercial applications of rumen microbial enzymes and to the molecular characterization of euryarcheal communities within an anaerobic digester. A section on intestinal disorders and rumen microbes covers acidosis in cattle, urea/ ammonia metabolism in the rumen, and nitrate/ nitrite toxicity in ruminant diets. Last, the future prospects of rumen microbiology are examined, based on the latest developments in this area. In summary, the book offers a highly systematic collection of essential content on rumen microbiology.

He published over 120 research papers/ reviews/ book chapters of impact and 5 lab manuals. He acted as chairman, key-note/invited speaker in scientific events, nationally and internationally. He has been involved in 18 external funded and institutional projects as PI/ Co-PI and supervised a number of master and doctoral scholars. He remained Paper Coordinator of Food and Dairy Microbiology for E-contents (i.e. E-PG Pathshala) of UGC under National Mission on Education. He also developed E-course of Introductory Dairy Microbiology for BTech (DT) under NAIP of ICAR.

He was awarded DSE Grant to attend ‘International Conference of Tropical Veterinary Medicine’ in 1995 at Germany, and DST & CSIR funding to present a paper at ‘BioMicroWorld 2007’, Spain. He chaired sessions of ‘Food Microbiology’ during ‘BioMicroWorld 2009’, Portugal; and ‘Rumen Microbiology’ during ‘ANINUE-2012’, Thailand. Besides, he visited Aberystwyth University, UK, twice under ‘Exchange of Scientists Programme’ of INSA with Royal Society, London (2007), and as ‘DBT-CREST’ Awardee (2013). He visited Taiwan in 2010 during exposure visit of DST.

He is a recipient of Young Scientist Award in 1996 from Association of Microbiologist of India; Kautilya Gold Medal in 1998-99 from Nature Conservators; Best Young Scientist Award in 2004 from Eureka Forbes; K.K. Iya Award in 2006; Honorable Mention, in 2010 from American Society for Microbiology; and Certificate of Appreciation from ABRCMS, 2012-13 & 2014, USA. He is a member of International Scientific Advisory Board of Formatex Research Centre, Spain.

He underwent training for Scientists & Technologists in 2007 at DST and in molecular biology at IARI and IMTECH besides, E-course Development at NAARM. He was ‘Co-organizing Secretary’ of Conference of AMI, 2004 and Convener of National Environment Awareness Campaign of MoEF at NDRI, 2007. He is editorial board member and referee of several reputed journals worldwide. He is a life member of number of renowned scientific bodies, and fellow of ANSI and NADSI.

Dr. Rameshwar Singh is presently serving as Project Director at ICAR – Directorate of Knowledge Management in Agriculture at the Indian Council of Agricultural Research, New Delhi. In this role, Dr. Singh is responsible for communication, information, publication of research journals and books and other outreach activities of the ICAR and its 100 odd research institutions at the national level. He has helped in further opening up ICAR through social media and e-publications.

He has over 36 years of research and teaching experience in dairy and rumen microbiology. He has completed a number of projects on biodegradation of lignin, animal and human probiotics, improvement and preservation of feeds and fodders through microbial fermentation, indigenous fermented milks and dairy starter cultures. His effort in expansion and strengthening of the National Collection of Dairy Cultures (NCDC) has been noteworthy. He also led the All India Network Project on Dairy Microbes as Nodal Officer. Dr. Singh has been previously associated with the Indian Veterinary Research Institute, Izatnagar and National Dairy Research Institute, Karnal. He has guided a number of postgraduate students for the masters and doctoral programmes, and has published highly cited research papers and review articles.

Dr. Singh is life member of the Association of Microbiologists of India, Indian Dairy Association, Indian Science Congress and Animal Nutrition Association. He has also been awarded the fellowship of National Academy of Dairy Sciences (India).

Prof. Devki Nandan Kamra is presently the ICAR National Professor at the Animal Nutrition Division of Indian Veterinary Research Institute, Izatnagar and has a research and teaching experience of 36 years. Previously, he had been the Director, Centre of Advanced Faculty Training in Animal Nutrition at IVRI, Izatnagar  from 2010 to 2013 and had an additional charge of Joint Director (Research) from July 2012 to February 2013.

He has completed several research projects funded by Department of Biotechnology, New Delhi, National Agricultural Technology Programme, ICAR, New Delhi, ICAR Cess Fund, International Atomic Energy Agency/ Food and Agricultural Organization (IAEA-FAO Joint Division), Austria and National Agricultural Innovative Programme (NAIP), New Delhi. His research interests are: Microbial diversity of the rumen, metagenomics and rumen manipulation for increasing livestock productivity, microbial feed additives for improving nutrient utilization and inhibition of enteric methane emission by the ruminants. He has guided 4 M.V.Sc. and 10 Ph.D. students for their research leading to respective degrees. He has written five books on Animal Nutrition, which are very well accepted by the students, teachers and researchers. He has published more than 130 research papers in journals of high repute and contributed several chapters in book edited by experts in Animal Nutrition.