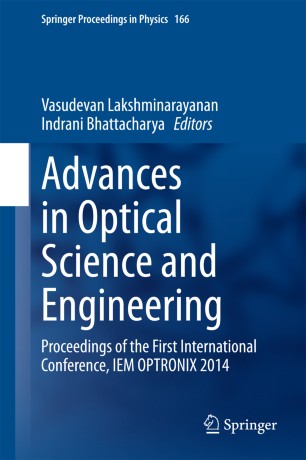 Advances in Optical Science and Engineering

The Proceedings of First International Conference on Opto-Electronics and Applied Optics 2014, IEM OPTRONIX 2014 presents the research contributions presented in the conference by researchers from both India and abroad. Contributions from established scientists as well as students are included. The book is organized to enable easy access to various topics of interest.

Ms. Indrani Bhattacharya obtained her B.Sc (Honours) in Physics and M.Sc (Tech) in Applied Physics (with Specialization in Optics and Opto-Eletronics) degrees in 1984 and 1988, respectively, from Serampore College and the Department of Applied Physics, University of Calcutta. After obtaining her Maters degree, she joined in M/s. Hindustan Cables Limited, HCL, A Govt. of India Undertaking as Fibre Optic System Development Engineer in Company’s Fibre Optics Project, Naini, Allahabad and worked there for two years. During those days, she was actively involved in the development of Fused Fibre Optics Taper Biconical Couplers, Optical Fibre Joint Boxes including manufacturing and testing of slotted core, loose tube fibre optics cables supplied to Department of Telecommunications, DOT, Govt. of  India. In the year 1992, she joined HCL, Corporate Office at Kolkata and actively involved as the Core Group Member for the Computerization of the Company. Ms. Bhattacharya was trained in UNIX, SYBASE, ORACLE with Developer 2000 required in the computerization process.

After serving 19 years 6 months in HCL, she planned to join academics and accordingly, she left HCL on 31st March 2010 and enrolled in Ph.D (Tech) program as a part-time research scholar in the Department of Applied Optics and Photonics, Calcutta University, under the guidance of Emeritus Professor Lakshminarayan Hazra. She had joined as Head of the Department, Electronics and Communication Engineering, Camellia College of Engineering and Technology, Burdwan and taught there for two years.

On 16th July, 2012, she joined Institute of Engineering and Management, IEM, Salt Lake, Kolkata as Assistant Professor (Sr. Grade) where she is working till date. In IEM, she has motivated students to be involved in research and development activities and opened SPIE and OSA approved IEM Student Chapters, Brahmatejas and Alokadhyaya. Prof. Bhattacharya is the core group member of the Research Council of IEM for promoting research and development activities among the faculty members and students of the Institute.

Prof. Bhattacharya is also the Co-coordinator of the Department of Science and Technology (DST), Govt. of India, sponsored INSPIRE (INnovation in Science Pursuit for Inspired Research) Science Camp organized in IEM, “The Enchanting World of Science”, to motivate the top 1% board students to be involved in  research and development activities in Science.