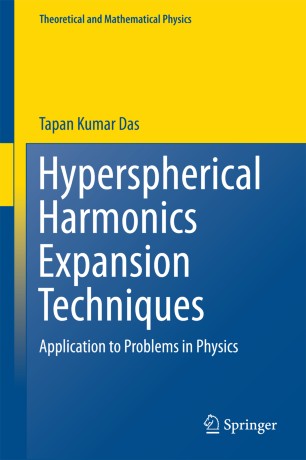 Application to Problems in Physics

The book provides a generalized theoretical technique for solving the fewbody Schrödinger equation. Straight forward approaches to solve it in terms of position vectors of constituent particles and using standard mathematical techniques become too cumbersome and inconvenient when the system contains more than two particles. The introduction of Jacobi vectors, hyperspherical variables and hyperspherical harmonics as an expansion basis is an elegant way to tackle systematically the problem of an increasing number of interacting particles. Analytic expressions for hyperspherical harmonics, appropriate symmetrisation of the wave function under exchange of identical particles and calculation of matrix elements of the interaction have been presented. Applications of this technique to various problems of physics have been discussed. In spite of straight forward generalization of the mathematical tools for increasing number of particles, the method becomes computationally difficult for more than a few particles. Hence various approximation methods have also been discussed. Chapters on the potential harmonics and its application to Bose-Einstein condensates (BEC) have been included to tackle dilute system of a large number of particles. A chapter on special numerical algorithms has also been provided. This monograph is a reference material for theoretical research in the few-body problems for research workers starting from advanced graduate level students to senior scientists.

Dr. Tapan Kumar Das completed M.Sc. from Calcutta University and PhD from the University of Pennsylvania (USA) in Theoretical Nuclear Physics under Prof. Abraham Klein and Prof. R.M. Dreizler in 1971. That work involved theoretical foundation of variable moment of inertia models in nuclear theory. He did his Post-doctoral research in nuclear many-body theory at the Technische Universität München (Germany). Then in 1973, he joined the Universidade Federal de Pernambuco (Brazil) as Professor of Physics. He collaborated with other physicists on few nucleon problems, including the proposition of a new tamed nuclear three-body force. Dr. Das returned to India in 1976 and joined the University of Burdwan, where he taught Physics as Lecturer, Reader and finally as Professor up to 1990, while continuing research on few-body systems using hyperspherical harmonics technique. He joined the University of Calcutta as Professor of Physics in 1990 and remained in that position until 2008. After that, he was awarded the UGC (Government of India) Emeritus Fellowship for two years and finally the DST (Government of India) Users Book Grant Project for two years from 2012. Dr. Das has visited Brazil, France, Russia, Italy and South Africa to do various collaborative research works. His research interests have been use of hyperspherical harmonics to numerous problems of physics and supersymmetric quantum mechanics. His major research achievements are: proposition of a tamed three-nucleon force and study its effect on trinucleon systems using hyperspherical harmonics, development of a many-body technique (correlated potential harmonics expansion method) for the Bose-Einstein condensate, formulation of supersymmetric quantum mechanics to multidimensional systems, etc. He has over 110 publications in reputed international journals.