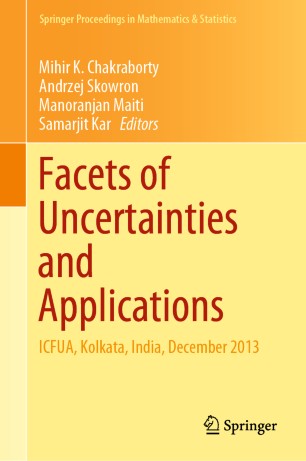 Facets of Uncertainties and Applications

Since the emergence of the formal concept of probability theory in the seventeenth century, uncertainty has been perceived solely in terms of probability theory. However, this apparently unique link between uncertainty and probability theory has come under investigation a few decades back. Uncertainties are nowadays accepted to be of various kinds. Uncertainty in general could refer to different sense like not certainly known, questionable, problematic, vague, not definite or determined, ambiguous, liable to change, not reliable. In Indian languages, particularly in Sanskrit-based languages, there are other higher levels of uncertainties. It has been shown that several mathematical concepts such as the theory of fuzzy sets, theory of rough sets, evidence theory, possibility theory, theory of complex systems and complex network, theory of fuzzy measures and uncertainty theory can also successfully model uncertainty.