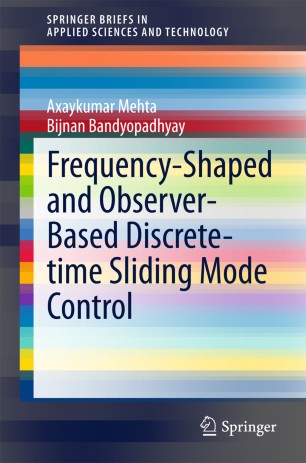 It is well established that the sliding mode control strategy provides an effective and robust method of controlling the deterministic system due to its well-known invariance property to a class of bounded disturbance and parameter variations. Advances in microcomputer technologies have made digital control increasingly popular among the researchers worldwide. And that led to the study of discrete-time sliding mode control design and its implementation. This brief presents, a method for multi-rate frequency shaped sliding mode controller design based on switching and non-switching type of reaching law. In this approach, the frequency dependent compensator dynamics are introduced through a frequency-shaped sliding surface by assigning frequency dependent weighing matrices in a linear quadratic regulator (LQR) design procedure. In this way, the undesired high frequency dynamics or certain frequency disturbance can be eliminated. The states are implicitly obtained by measuring the output at a faster rate than the control. It is also known that the vibration control of smart structure is a challenging problem as it has several vibratory modes. So, the frequency shaping approach is used to suppress the frequency dynamics excited during sliding mode in smart structure. The frequency content of the optimal sliding mode is shaped by using a frequency dependent compensator, such that a higher gain can be obtained at the resonance frequencies. The brief discusses the design methods of the controllers based on the proposed approach for the vibration suppression of the intelligent structure. The brief also presents a design of discrete-time reduced order observer using the duality to discrete-time sliding surface design. First, the duality between the coefﬁcients of the discrete-time reduced order observer and the sliding surface design is established and then, the design method for the observer using Riccati equation is explained. Using the proposed method, the observer for the Power System Stabilizer (PSS) for Single Machine Inﬁnite Bus (SMIB) system is designed and the simulation is carried out using the observed states. The discrete-time sliding mode controller based on the proposed reduced order observer design method is also obtained for a laboratory experimental servo system and veriﬁed with the experimental results.

Dr. Axaykumar Mehta Born in Bharu0ch, Gujarat, India in 1975 and got B.E. Electrical (1996), M.Tech (2002) and Ph.D. (2009) degree from Gujarat University Ahmedabad, IIT Kharagpur and IIT Mumbai, respectively. He worked as an Associate Faculty at Indian Institute Technology, Gandhinagar during 2010-2011. He also acted as Professor; Director at Gujarat Power Engineering and Research Institute, Mehsana, Gujarat, India during 2012-2014. Currently, he is an Associate Professor at Institute of Infrastructure Technology Research and Management, Ahmedabad, Gujarat. His research interest is Non-linear Sliding Mode Control and Observer, Sliding Mode Control Application in Electrical Engineering and Networked Control System. He has published 30 research papers in peer reviewed international journals and conferences of repute. He is Senior Member IEEE, Life Member of Institution of Engineers (India), Life Member of Indian Society for Technical Education and Member of Systems Society of India. He is conferred the Best paper award by SSI and Pedagogical Innovation award 2014 by Gujarat Technological University.

Prof. Bijnan Bandyopadhyay received his B.E. degree in Electronics and Telecommunication Engineering from the University of Calcutta, Calcutta, India in 1978, and Ph.D. in Electrical Engineering from the Indian Institute of Technology, Delhi, India in 1986. In 1987, he joined the Interdisciplinary Programme in Systems and Control Engineering, Indian Institute of Technology Bombay, India, as a faculty member, where he is currently a Professor. In 1996, he was with the Lehrstuhl fur Elektrische Steuerung und Regelung, Ruhr Universitat Bochum, Bochum, Germany, as an Alexander von Humboldt Fellow. He has been a visiting Professor at Okayama University, Japan, Korea Advance Institute Science and Technology (KAIST) South Korea and Chiba National University in 2007. He visited University of Western Australia, Australia as a Gledden Visiting Senior Fellow in 2007. Professor Bandyopadhyay is recipient of UKIERI (UK India Education and Research Initiative) Major Award in 2007, ‘Distinguished Visiting Fellowship’ award in 2009 and 2012 from "The Royal Academy of Engineering", London. Professor Bandyopadhyay is a Fellow of Indian National Academy of Engineering (INAE), Senior Member of IEEE and a Fellow of IETE (India). He has published 9 books and monographs, 6 book chapters and more than 300 journal articles and conference papers. He has guided 25 Ph.D. theses at IIT Bombay. His research interests include the areas of higher order sliding mode control, multirate output feedback control, discrete-time sliding mode control, large-scale systems, model order reduction, nuclear reactor control and smart structure control. Prof. Bandyopadhyay served as Co-Chairman of the International Organization Committee and as Chairman of the Local Arrangements Committee for the IEEE International Conference in Industrial Technology, held in Goa, India, in Jan. 2000. He also served as one of the General Chairs of IEEE ICIT conference held in Mumbai, India in December 2006. Prof. Bandyopadhyay has served as General Chair for IEEE International Workshop on Variable Structure Systems held in Mumbai in January 2012.