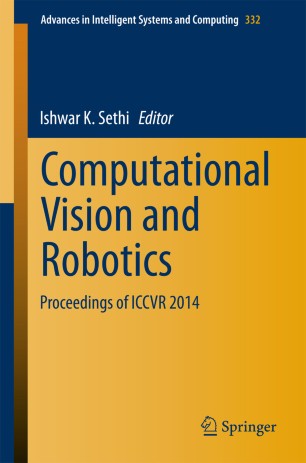 Part of the Advances in Intelligent Systems and Computing book series (AISC, volume 332)

Ishwar K. Sethi is currently a professor in the Department of Computer Science and Engineering at Oakland University in Rochester, Michigan, where he served as the chair of the department from 1999 to 2010. From 1982 to 1999, he was with the Department of Computer Science at Wayne State University, Detroit, Michigan. Before that, he was a faculty member at Indian Institute of Technology, Kharagpur, India, where he received his Ph.D. degree in 1978. His current research interests are in data mining, pattern classification, multimedia information indexing and retrieval, and social media analysis. He has graduated 24 doctoral students and has authored or coauthored over 160 journal and conference articles. He has served on the editorial boards of several prominent journals including IEEE Trans. Pattern Analysis and Machine Intelligence, and IEEE Multimedia. He was elected IEEE Fellow in 2001 for his contributions in artificial neural networks and statistical pattern recognition.