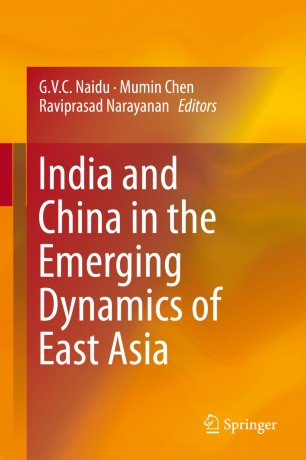 India and China in the Emerging Dynamics of East Asia

Though considerable research literature is now available on China–India relations, most of it still follows a conventional narrative, viewing the relationship through the narrow conflictual prism limited to South Asia than in the new, larger perspective, especially in the context of emerging East Asian dynamics. This book offers comprehensive analyses of some of these issues in papers addressing two broad themes. One, significant trends in the relationship between China and India on a range of issues, including economic development models, their military strategies, and the boundary dispute; and two, how others are responding to the rise of India and China and their impact on East Asia. Together, the chapters constitute a comprehensive study on both China–India relations and their concurrent rise, including a variety of perspectives and methodologies. Written by some of the top experts on the subject from India, China, Japan, and Taiwan and covering a broad range of issues, the book will generate considerable interest in understanding this relatively neglected dimension of today’s East Asia.

Mumin Chen is Director of Center for Strategic Studies on South Asia and the Middle East, and an Associate Professor at the Graduate Institute of International Politics, National Chung Hsing University. Taiwan. His research focuses on China's foreign relations and regional security issues in South Asia with particular focus on India-China relations and China-Taiwan relations. Chen has published three books: International Security Theory: Power, State and Threat (in Chinese, Wu-Nan, Taipei: 2009), Prosperity but Insecurity: Globalization and China's National Security 1979-2000 (Lambert Academic Publishing, Germany: 2010), and International Relations Illustrated (in Chinese, co-author with Chen Wan-yu, Wu-Nan, Taipei: 2012), and his research papers have been published on various academic journals such as Asian Perspectives, Issues and Studies, and China Report.

Raviprasad Narayanan is an Assistant Research Fellow with the Institute of International Relations (IIR) and concurrently an Assistant Professorin Asia-Pacific Studies, National Chengchi University, Taipei. APh. D from the Centre for East Asian Studies, Jawaharlal Nehru University, he worked with the Institute for Defense Studies and Analyses, India’s leading think-tank on defence and strategic issues from 2003 till 2009. His research interests include Sino-Indian relations, South Asian security, Asia-Pacific security issues and the IR Theory. His publications have appeared in the Asian Perspective, China Report, Harvard Asia Quarterly, Strategic Analysis among other journals. He has had research stints with the Shanghai Academy of Social Sciences (SASS), Shanghai, Centre of Asian Studies, The University of Hong Kong, Japan Institute of International Affairs (JIIA), Tokyo, Shanghai Institute of International Studies (SIIS), Shanghai and the Institute of Chinese Studies (ICS), New Delhi, where he is an Adjunct Fellow.