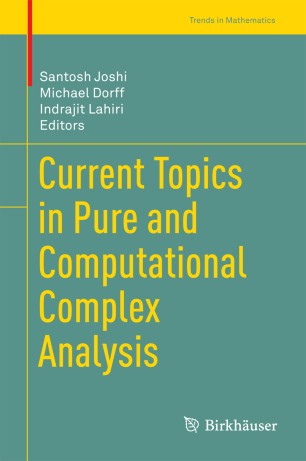 The book contains 13 articles, some of which are survey articles and others research papers. Written by eminent mathematicians, these articles were presented at the International Workshop on Complex Analysis and Its Applications held at Walchand College of Engineering, Sangli. All the contributing authors are actively engaged in research fields related to the topic of the book. The workshop offered a comprehensive exposition of the recent developments in geometric functions theory, planar harmonic mappings, entire and meromorphic functions and their applications, both theoretical and computational. The recent developments in complex analysis and its applications play a crucial role in research in many disciplines.

SANTOSH JOSHI is associate professor of mathematics at Walchand College of Engineering, Sangli, India. He received his PhD in 1996 from Shivaji University, Kolhapur, India. He is also vice-president of Indian Academy of Mathematics (IAM) and a founder member of Indian Society for Industrial Mathematics (ISIM), life member of Indian Mathematical Society (IMS) and Indian Science Congress (ISG). He received the Boyscast fellowship from the Department of Science and Technology (DST), India, for visiting the University of Belgrade. With over 22 years of teaching experience, Professor Joshi has published over 70 research papers and delivered about 30 talks at several international conferences. He has visited Turkey, Israel, Malaysia, China, Portugal, South Korea, Finland, and the USA for collaboration. He has completed a research project of DST and of CSIR. He is instrumental in bringing grants from government of India for his institute.

MICHAEL DORFF is professor of mathematics at Brigham Young University, Utah, USA. He earned his PhD in 1997 from the University of Kentucky. Professor Dorff also directs three programs funded by the National Science Foundation: the Center of Undergraduate Research in Mathematics (CURM), Regional Undergraduate Mathematics Conferences (RUMC), and Preparation for Industrial Careers in the Mathematical Sciences (PIC Math). A Fulbright Scholar in Poland and a Fellow of the American Mathematical Society (AMS), Professor Dorff has received 10 different teaching awards. He has published about 35 refereed papers and has given about 250 talks on mathematics at several international conferences and universities.

INDRAJIT LAHIRI is professor of mathematics at the University of Kalyani, India. He received his PhD in 1990 and DSc in 2005 from the University of Kalyani, India. With over 123 papers published and about 30 talks at several international conferences and workshops, Professor Lahiri is a member of the editorial boards of several peer reviewed journals. He has over 26 years of teaching experience.