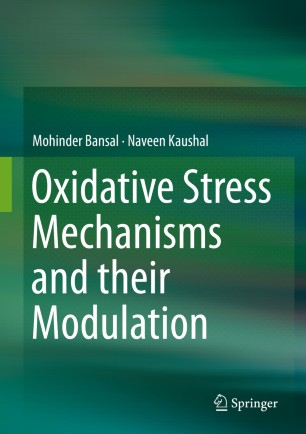 Oxidative Stress Mechanisms and their Modulation

Research over the years has demonstrated that free radicals mediated oxidative stress lies at the helm of almost all patho-physiological phenomena. These findings emphasize on the need to understand the underlying molecular mechanism(s) and their critical role in the pathogenesis. This book aims to focus on these areas to provide readers a comprehensive outlook about the major redox sensitive pathways and networks involved in various disease conditions. In the first chapter of the book, basic information about the oxidative stress, its generation, its biomarkers and its role in body are discussed. In the next three chapters, the role of oxidative stress in various pathologies ranging from neurological disorders, to cardiovascular diseases, cancers, metabolic diseases and ageing have been described. Chapter 5 cumulatively describes the most important molecular signaling pathways that are affected by reactive oxygen species (ROS). These are the mechanisms which are common denominators in various pathological states. In the next part of the book, various antioxidant strategies to target and mitigate ROS have been discussed with details on the mechanisms. Selenium, being the research focus and interest of the authors for years, the role of selenium as an antioxidant as part of selenoproteins has been included in the book. Finally, the book culminates with authors’ perspective on the future of the redox biology field. Throughout the book, efforts have been made to use simplified language and suitable figures for ease to understand the contents. Although the authors have tried to touch on all the different aspects of oxidative stress in detail, the fact that it is a continuously growing field with updates coming every day, there might be some areas which might not be described in depth. This book is designed for students, young scientists to get acquainted with the redox biology. Overall, this book is a reference to understand the redox regulation of cellular signaling pathways involved in pathogenesis.