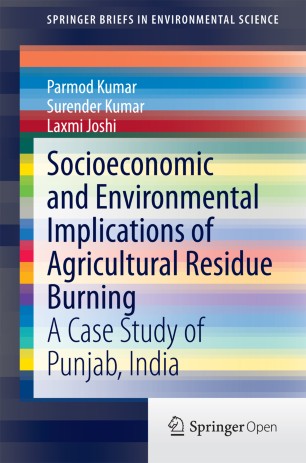 A Case Study of Punjab, India

This book discusses the important issue of the socioeconomic and environmental impacts of agricultural residue burning, common in agricultural practices in many parts of the world. In particular, it focuses on the pollution caused by rice residue burning using primary survey data from Punjab, India. It discusses emerging solutions to agricultural waste burning that are cost-effective in terms of both money and time. The burning of agricultural residue causes severe pollution in land, water and air and contributes to increased ozone levels and climate change in the long term. However, appropriate assessments have not been undertaken so far to demonstrate the relevant impact of agriculture-based pollution, especially residue burning. This book addresses this gap in the literature. Punjab has been used as a case study as it is the chief granary of India, contributing to 27.2 percent of the Indian national produce of rice and 43.8 percent of wheat. It is presumed that the findings from this state will be useful not only for other agricultural areas in India, but across the world. This book, therefore, sensitizes policy makers, researchers and students about the impacts of air pollution caused by agricultural residue burning---a subject not much dealt in the literature---and provides a way forward.