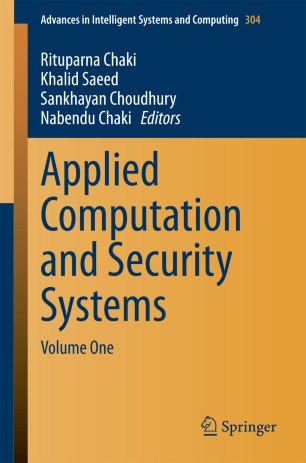 Part of the Advances in Intelligent Systems and Computing book series (AISC, volume 304)

This book contains the extended version of the works that have been presented and discussed in the First International Doctoral Symposium on Applied Computation and Security Systems (ACSS 2014) held during April 18-20, 2014 in Kolkata, India. The symposium has been jointly organized by the AGH University of Science & Technology, Cracow, Poland and University of Calcutta, India.

The Volume I of this double-volume book contains fourteen high quality book chapters in three different parts. Part 1 is on Pattern Recognition and it presents four chapters. Part 2 is on Imaging and Healthcare Applications contains four more book chapters. The Part 3 of this volume is on Wireless Sensor Networking and it includes as many as six chapters.

Volume II of the book has three Parts presenting a total of eleven chapters in it. Part 4 consists of five excellent chapters on Software Engineering ranging from cloud service design to transactional memory. Part 5 in Volume II is on Cryptography with two book chapters in it. Part 6 of this volume is on Computer Aided Design with four chapters in it. We strongly believe that the twenty five chapters in these two volumes of Applied Computation and Security Systems will be appreciated by all its readers.

Rituparna Chaki is an Associate Professor in the A K Choudhury School of Information Technology, University of Calcutta, India since June 2013. She joined academia as faculty member in the West Bengal University of Technology in 2005. Before that she has served under Government of India in maintaining industrial production database. Rituparna has done her PhD from Jadavpur University in 2002. She has been associated in organizing many conferences in India and abroad as Program Chair, OC Chair, or as member of Technical Program Committee. She has published more than 60 research papers in reputed journals and peer-reviewed conference proceedings. Her research interest is primarily in Ad-hoc networking and its security. She is a professional member of IEEE and ACM.

Khalid Saeed received the BSc Degree in Electrical and Electronics Engineering from Baghdad University in 1976, the MSc and PhD Degrees from Wroclaw University of Technology, in Poland in 1978 and 1981, respectively. He received his DSc Degree (Habilitation) in Computer Science from Polish Academy of Sciences in Warsaw in 2007. He is a Professor of Computer Science with AGH University of Science and Technology in Poland. He has published more than 200 publications - edited 23 books, Journals and Conference Proceedings, 8 text and reference books. He supervised more than 110 MSc and 12 PhD theses. His areas of interest are Biometrics, Image Analysis and Processing and Computer Information Systems. He gave 39 invited lectures and keynotes in different universities in Europe, China, India, South Korea and Japan. The talks were on Biometric Image Processing and Analysis. He received about 18 academic awards. Khalid Saeed is a member of more than 15 editorial boards of international journals and conferences. He is an IEEE Senior Member and has been selected as IEEE Distinguished Speaker for 2011-2016. Khalid Saeed is the Editor-in-Chief of International Journal of Biometrics with Inderscience Publishers.

Sankhayan Choudhury is Associate Professor in the Department Computer Science & Engineering, University of Calcutta, India. Currently, he is head in this department. Moreover, he is Co-ordinator of TEQIP-II, University of Calcutta. Dr. Choudhury has obtained his B.Sc (Hons.) in Mathematics under University of Calcutta. Thereafter he has obtained B.Tech. and M.Tech in Computer Science & Engineering from University of Calcutta. He has completed PhD from Jadavpur University, India in 2006. His research interests include Mobile Computing, Networking, Sensor Networking, Cloud Computing, etc. Besides authoring a book, Dr. Choudhury has published close to 50 peer-reviewed papers in international journals and conference proceedings. He has also served in the Program Committees of several international conferences and has also chaired the Program and Organizing Committees of a few. Dr. Choudhury is a professional member of ACM and an executive committee member for the local ACM professional chapter in Kolkata, India.

Nabendu Chaki is a Senior Member of IEEE and an Associate Professor in the Department Computer Science & Engineering, University of Calcutta, India. Besides editing several volumes in Springer in LNCS and other series, Nabendu has authored three textbooks with reputed publishers like Taylor and Francis (CRC Press), Pearson Education, etc. Dr. Chaki has published more than 120 refereed research papers in Journals and International conferences. His areas of research interests include image processing, distributed systems, and network security. Dr. Chaki has also served as a Research Assistant Professor in the PhD program in Software Engineering in U.S. Naval Postgraduate School, Monterey, CA. He is a visiting faculty member for many Universities including the University of Ca’Foscari, Venice, Italy. Dr. Chaki has contributed in SWEBOK v3 of the IEEE Computer Society as a Knowledge Area Editor for Mathematical Foundations. Besides being in the editorial board of Springer and many international journals, he has also served in the committees of more than 50 international conferences. He is the founding Chapter Chair for ACM Professional Chapter in Kolkata, India since January 2014.