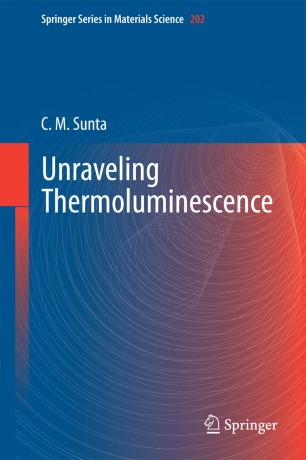 The book is essentially about the theoretical aspects of thermoluminescence (TL). It is structured and written in a manner which will specially be of interest to the fresh undergraduate students and young researchers planning to take up work in the field of thermoluminescence. It is arranged into seven chapters, starting with the historical growth of the subject of TL and an overview of the luminescence phenomena. A Physical model involving thermally disconnected deep traps is specially described. Using this model expressions are derived for the TL intensity growth curve, the supralinearity factor and the pre-dose sensitization factor. A new factor, called the sensitization factor is introduced which co-relates the supralinearity and the pre-dose sensitization factors. Dealing with the theoretical models of TL, limitations of the general order (GO) kinetics and the mixed order kinetics models are specially brought out. Due to the lacunae of GO model the determination of activation energy becomes subject to error, when GO model is applied to the experimental TL glow curves. Satisfying the quasi-equilibrium (QE) condition is essential for the validity of analytical models of TL. A new method is given to ascertain if QE condition is satisfied in an experimental glow curve. The book assumes a basic knowledge of physics and mathematics at an undergraduate level, and takes the reader to the results at the cutting edge of understanding of the subject in an easy to understand manner.

Dr. C.M. Sunta was awarded the M.Sc. degree in Physics from the university of Agra and Master of Science degree from University of Rochester, New York during his stint as a Health Physics trainee at Rochester and Brookhaven National Laboratory. He was awarded the Ph.D. in Physics during his research career at Bhabha Atomic Research Centre (BARC), Mumbai. During 1968 to 1975, he worked on two major Research projects, one under World Health Organization (WHO) and the other under the International Atomic Energy Agency (IAEA) Vienna. The former dealt with exhaustive measurement of background radiations along the coastal areas of Kerala State of India which have radioactivity due to thorium bearing sand and its possible health effects. The IAEA project dealt with the development of radiation monitoring systems using the thermoluminescence (TL) phenomenon. Dr. Sunta continued his basic and applied research on TL simultaneously and heading the research group on this subject. From 1973 to 1975, he worked as an International Atomic Energy Agency’s expert in Brazil, helping researchers there develop thermoluminescence dosimetry systems and enhance applied research in this area. He has 80 peer reviewed papers in journals and about 110 conference presentations and research reports to his credit. In 1990, he was appointed as Director, Radiation Safety Division in the Atomic Energy Regulatory Board (AERB), Govt. of India, from where he superannuated in 1992. Subsequently he accepted a research assignment in the department of Nuclear Physics at the University of Sao-Paulo Brazil and continued as a visiting Professor till 2004. He continues to pursue his research interest interacting with young researchers of BARC. He is a Fellow of the Luminescence Society of India and a Life Member of the Indian Nuclear Society, the Indian Association for Radiation Protection and the Radiation Biology Association of India.