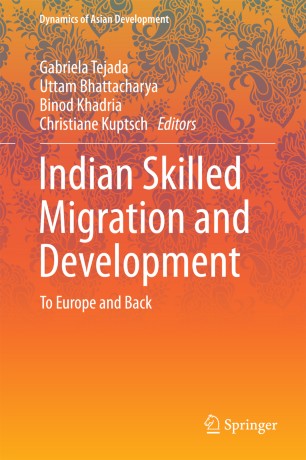 To Europe and Back

This topical volume offers new empirical evidence on Indian skilled migrants living in European countries, which have become important destinations in the global competition for talent, and on returnees in India. Making use of an interdisciplinary and multi-level analytical framework, which simultaneously includes diaspora interventions and return migration as its main channels of participation, the studies included in this volume offer original insights into the dynamics of skilled migration from India and its effects. The chapters highlight the determining factors required to channel possible contributions towards broad-based development and they suggest policy options for the home and host countries.

Skilled migration has emerged as a major theme in the migration and development nexus in recent years, and this has led to an increase in studies that contemplate foreign-based skilled individuals from the perspective of their potential contributions to their countries of origin, either through diaspora interventions or their eventual return. India is a paradigmatic case, given the significant presence of Indian skilled professionals and students in industrialised countries and the established positive vision of their influence on the socioeconomic progress of the country through transfers of knowledge and skills, investment and financial remittances. At the same time, the number of skilled professionals returning to India has also increased, and these returnees bring an accumulation of knowledge and technical abilities, financial resources and entrepreneurial ventures, which are susceptible to generating changes in the local context. However, the creation of benefits depends on several factors, mostly associated with structural conditions and opportunities in the countries of destination and origin concerned.

The volume critically discusses the above issues in the context of skilled migration from India to Europe and will be useful for academics and policy makers interested in migration studies and development issues.

Gabriela Tejada is Senior Scientist at Cooperation and Development Center (CODEV) at the École Polytechnique Fédérale de Lausanne (EPFL), Switzerland, where she leads the research line on scientific diasporas, migration and development. Her research agenda focuses on the links between skilled migration and home country development and on diaspora transnationalism. She has studied countries such as Colombia, South Africa, India, Moldova and Tunisia. Her research has been funded by grants from institutions such as the Swiss National Science Foundation, the Swiss Agency for Development and Cooperation and the Swiss Network for International Studies. At EPFL, she is involved in the promotion of scientific cooperation activities with emerging and developing countries. She obtained her primary degree in International Relations from the Universidad Iberoamericana in Mexico and she holds a PhD Cum Laude in Political Science from the Universidad Autónoma de Barcelona in Spain.

Uttam Bhattacharya is Associate Professor of Economics at the Institute for Development Studies, Kolkata (IDSK), India. He holds a Ph.D. in Economics from the University of Calcutta. He served as Guest Lecturer with the Department of Economics at Vidyasagar University in Midnapore, West Bengal and at Rabindra Bharati University, Kolkata. Prior to this, he was attached to the Centre for Studies in Social Sciences Calcutta (CSSSC). His current work at IDSK is on Indian industrial development, Intellectual Property Rights (IPR) and Indian research and development. He is also in the process of editing a book on the development of capital goods in India. His main areas of research include the machine tool industry in India and the scope for self-reliance, IPRs and India, the Indian patent system, Indo-Australian economic relations, migration, child labour and the education of children in India, micro-finance and poverty eradication, local governments and development.

BinodKhadria is Professor of Economics at the Zakir Husain Centre for Educational Studies, School of Social Sciences at Jawaharlal Nehru University (JNU), New Delhi; he is also the Director of International Migration and Diaspora Studies (IMDS) Project. His published works on migration include The migration of knowledge workers: second-generation effects of India's brain drain (Sage, 1999) and several research papers published by the ILO, the OECD, IRD-France, Institute of Developing Economies-Japan External Trade Organisation (IDE-JETRO) and the Global Commission on International Migration (GCIM). He is a member of the editorial boards of several international journals. With the India Migration Report 2009: Past, Present and the Future Outlook, he launched the IMR series, followed by India Migration Report 2010-2011: The Americas, published in 2012 by Cambridge University Press, New York.

Christiane Kuptsch is Senior Specialist in Migration Policy at the International Labour Office (ILO) in Geneva, Switzerland. Before taking up this position, she was Senior Research Officer at the ILO's International Institute for Labour Studies; she also worked for the ILO-linked International Social Security Association. She is a Political Science graduate of the Graduate Institute of International Studies, Geneva, and she also studied law at the University of Hamburg in Germany. Her publications include articles on the migration of students and trainees, the protection of migrant workers, temporary foreign-worker programmes, and the effects of the economic crisis on migration policies and she has also edited books on migrant recruitment agents, the increasing competition for global talent, and the internationalization of labour markets. She is the co-author of Managing Labour Migration in the Twenty-First Century (Yale University Press, 2006).