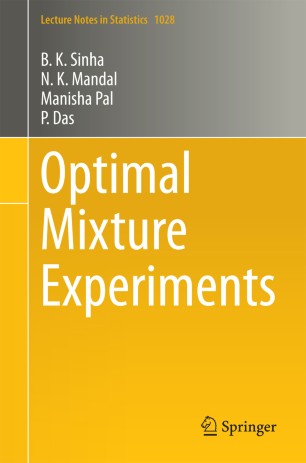 The book dwells mainly on the optimality aspects of mixture designs. As mixture models are a special case of regression models, a general discussion on regression designs has been presented, which includes topics like continuous designs, de la Garza phenomenon, Loewner order domination, Equivalence theorems for different optimality criteria and standard optimality results for single variable polynomial regression and multivariate linear and quadratic regression models. This is followed by a review of the available literature on estimation of parameters in mixture models. Based on recent research findings, the volume also introduces optimal mixture designs for estimation of optimum mixing proportions in different mixture models, which include Scheffé’s quadratic model, Darroch-Waller model, log- contrast model, mixture-amount models, random coefficient models and multi-response model.  Robust mixture designs and mixture designs in blocks have been also reviewed. Moreover, some applications of mixture designs in areas like agriculture, pharmaceutics and food and beverages have been presented. Familiarity with the basic concepts of design and analysis of experiments, along with the concept of optimality criteria are desirable prerequisites for a clear understanding of the book.  It is likely to be helpful to both theoreticians and practitioners working in the area of mixture experiments.

Professor Bikas Kumar Sinha is a retired professor of statistics of Indian Statistical Institute, Calcutta, India. He has travelled extensively within India and abroad for collaborative research and with teaching assignments. He has served as a ‘UN Expert on Mission’ and also as a consultant for USEPA. He is a ‘Summer at Census’ visitor at the US Census Bureau. He has more than 130 research publications in areas like linear models and optimal designs, survey sampling theory and statistical methodologies. He is the co-author of two research monographs published under Springer-Verlag Lecture Notes in Statistics Series (1989, 2002).

Professor Nripes Kumar Mandal is a senior faculty in the Department of Statistics, University of Calcutta, India. He has been working in the area of design of experiments since 1977. He has visited several universities/institutes in India and abroad for teaching/collaborative research and as a resource person/invited speaker/keynote speaker at Workshops/Conferences/Symposia. He has more than 60 research articles published in peer-reviewed journals. He is the co-author of a research monograph published under Springer-Verlag Lecture Notes in Statistics Series (2002).

Professor Manisha Pal teaches at the Department of Statistics, University of Calcutta, India. She has undertaken teaching and collaborative research assignments in Indian and foreign universities. She has been a resource person/invited speaker at Workshops/ Conferences/Symposia held in India and abroad. She has more than 85 published research articles in the areas of inventory control, reliability inference, skewed distributions, mixture experiments and data analysis.

Professor Premadhis Das is a senior faculty in the Department of Statistics, University of Kalyani, India. He has been working in the area of design of experiments for more than 30 years, and has visited many universities for teaching/ collaborative research and as a resource person/invited speaker at Workshops/ Conferences/ Symposia. He has research publications in many national and international journals of repute.

“The aim of this book is to present different aspects regarding the optimality for mixture designs. … At the end we find an up-to-date bibliography, an author index and a subject index. The book is very useful for both theoreticians and applied statisticians working especially in the field of mixture experiments using different mixture models.” (T. Postelnicu, zbMATH 1308.62007, 2015)