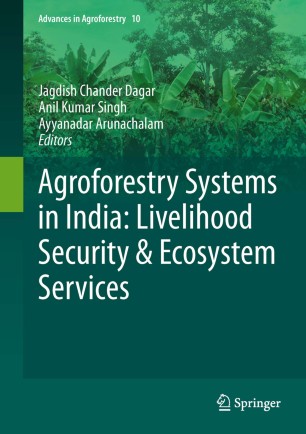 Part of the Advances in Agroforestry book series (ADAG, volume 10)

Agroforestry, the word coined in early seventies, has made its place in all the developed and the developing countries of the world and is now recognized as an important approach to ensuring food security and rebuilding resilient rural environments. India has been an all-time leader in agroforestry. The South and Southeast Asia region comprising India is often described as the cradle of agroforestry. Almost all forms of agroforestry systems exist across India in ecozones ranging from humid tropical lowlands to high-altitude and temperate biomes, and perhumid rainforest zones to parched drylands. The country ranks foremost among the community of nations not only in terms of this enormous diversity and long tradition of the practice of agroforestry, but also in fostering scientific developments in the subject. Agroforestry applies to private agricultural and forest lands and communities that also include highly erodible, flood-prone, economically marginal and environmentally sensitive lands. The typical situation is agricultural, where trees are added to create desired benefits. Agroforestry allows for the diversification of farm activities and makes better use of environmental resources. Owing to an increase in the population of human and cattle, there is increasing demand of food as well as fodder, particularly in developing countries like India. So far, there is no policy that deals with specifics in agroforestry in India. But, the Indian Council of Agricultural Research has been discussing on the scope of having a National Agroforestry Policy in appropriate platforms. However, evolving a policy requires good and reliable datasets from different corners of the country on the subject matter. This synthesis volume containing 13 chapters is an attempt to collate available information in a classified manner into different system ecologies, problems and solutions, and converging them into a policy support.

Dr. Jagdish Chander Dagar has been well recognized for his research in the areas of management of natural resources, agroforestry, rehabilitation of degraded lands, biosaline agriculture, biodrainage, climate change, sustainable agriculture and policy; both nationally and internationally. Dr. Dagar was the Assistant Director General (Agronomy/Agroforestry) at the headquarters of ICAR. He has written several books and published more than 200 research papers of high repute in international and national level journals and has been conferred with several awards and honors. He is a Fellow of National Academy of Agricultural Sciences and several other professional societies. He has also been consulting several national and international agencies such as FAO and CIMMYT.

Dr. A. Arunachalam is a trained ecologist from the North-Eastern Hill University, Shillong, and has grown professionally through strong pursuit in ecological research that is evident from his more than 135 research papers. Currently, he is working as a Principal Scientist in the headquarters of Indian Council of Agricultural Research (ICAR), Krishi Bhawan, New Delhi. His academic excellence is also evident from several awards/honors he has received. Dr. Arunachalam is a Fellow/Associate of several professional societies.