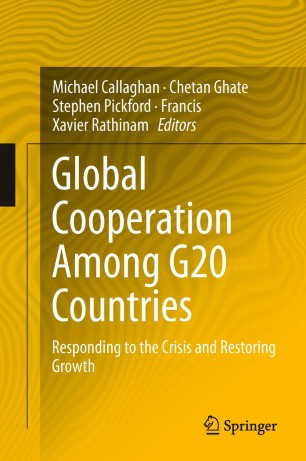 Responding to the Crisis and Restoring Growth

At the outbreak of the global financial crisis, 2008, the G20 was widely acknowledged as helping prevent an even more serious decline in the global economy. It helped to calm the panic in financial markets and articulate a set of possible policy options to restore global stability and growth. However, as the dual-track recovery set in, policy options for advanced economies and EMEs diverged. Within this context, this book will explore the scope for cooperation amongst the G20 and the diverging challenges and the intricate interconnectedness of policy options between advanced economies and the EMEs within the G20.

Chetan Ghate is an Associate Professor in the Economics and Planning Unit of the Indian Statistical Institute – Delhi.  He is currently a member of the Technical Advisory Committee for Monetary Policy at the Reserve Bank of India. He received his Ph.D. in Economics and M.S. in Applied Mathematics from Claremont Graduate University (USA); his Masters in Economics from the Delhi School of Economics (India); and his B.A. Economics from Colorado College (USA).  He has held faculty positions at the Colorado College, the German Institute of Economic Research, University of Sydney, and Claremont Graduate University. His areas of interest lie in macroeconomic theory and policy. He has published in several leading journals in his field. He recently edited “The Oxford Handbook of the Indian Economy” (OUP) which was selected as one of CHOICE's "Outstanding Academic Titles for 2012". In May 2011, he was a recipient of a Rockefeller Foundation residency in Bellagio, Italy. From 2012-2013 he was the Reserve Bank of India Chair Professor in Macroeconomics at ICRIER (New Delhi).

Stephen Pickford is a Senior Research Fellow at Chatham House in London, UK.  He has worked on international economic issues for much of his career, and retired from HM Treasury (UK) in 2010, where he was the Managing Director (International and Finance) and the UK’s G7 and G20 Finance Deputy.  Prior to this he held posts dealing with both European and international finance issues at HM Treasury, and from 1998 to 2001 he was the UK’s Executive Director on the boards of the IMF and World Bank.  Previous positions include leading the team responsible for Bank of England independence in 1997, and between 1989 and 1993 he worked on macroeconomic policy and forecasting at the New Zealand Treasury.  He was educated at the University of Cambridge, England and the University of British Columbia, Canada.

Dr. Rathinam is a research advisor with the Department for International Development (DFID). His recent research work explores the legal, regulatory and political economy aspects of current financial and banking sector reforms in India. Formerly he was a senior fellow at ICRIER. He has a Ph.D. in Economics from Hyderabad Central University and was a visiting fellow at the Institute for Law and Economics, University of Hamburg, Germany.  Dr. Rathinam has published in Emerging Markets Review, Macroeconomics and Finance in Emerging Market Economies, and Environment and Development Economics, among others.