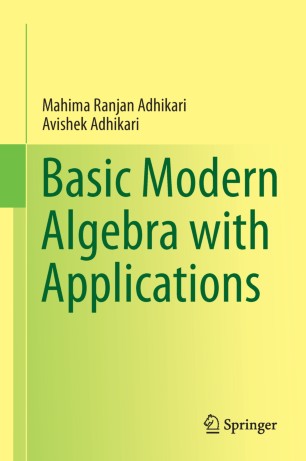 The book is primarily intended as a textbook on modern algebra for undergraduate mathematics students. It is also useful for those who are interested in supplementary reading at a higher level. The text is designed in such a way that it encourages independent thinking and motivates students towards further study. The book covers all major topics in group, ring, vector space and module theory that are usually contained in a standard modern algebra text.

In addition, it studies semigroup, group action, Hopf's group, topological groups and Lie groups with their actions, applications of ring theory to algebraic geometry, and defines Zariski topology, as well as applications of module theory to structure theory of rings and homological algebra. Algebraic aspects of classical number theory and algebraic number theory are also discussed with an eye to developing modern cryptography. Topics on applications to algebraic topology, category theory, algebraic geometry, algebraic number theory, cryptography and theoretical computer science interlink the subject with different areas. Each chapter discusses individual topics, starting from the basics, with the help of illustrative examples. This comprehensive text with a broad variety of concepts, applications, examples, exercises and historical notes represents a valuable and unique resource.