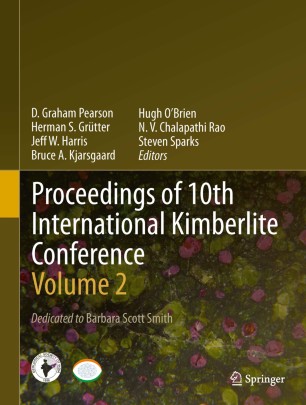 International Kimberlite conferences (IKCs) are special events that are held across the world once in four to five years. IKC is the confluence platform for academicians, scientists and industrial personnel concerned with diamond exploration and exploitation, petrology, geochemistry, geochronology, geophysics and origin of the primary diamond host rocks and their entrained xenoliths and xenocrysts (including diamond) to get together and deliberate on new advances in research made in the intervening years. Ever since the organization of first IKC in 1973 and its tremendous success, the entire geological world eagerly look forward to subsequent such conferences with great enthusiasm and excitement. The scientific emanations from IKCs continue to make significant impact on our understanding of the composition, nature and evolution of the planet we live on. The previous conferences were held at Cape Town (1973), Santa Fe, New Mexico (1977), Clermont-Ferrand, France, (1982). Perth, Western Australia (1987), Araxa, Brazil (1991), Novosibirsk, Russia (1995), Cape Town (1998), Victoria, Canada (2003) and Frankfurt, Germany (2008).

The tenth IKC was held at Bangalore, India between 5th and 11th February 2012. The conference was organized by the Geological Society of India in association with the government organizations, academic institutions and Indian diamond mining companies. About 300 delegates from 36 countries attended the conference and 224 papers were presented. The papers include 78 oral presentations and 146 poster presentations on following topics: Kimberlite geology, origin, evolution and emplacement of kimberlites and related rocks, petrology and geochemistry of metasomatised lithospheric mantle magmas, diamond exploration, cratonic roots, diamonds, diamond mining and sustainable developments and policies and governance of diamond exploration. Pre- and post-conference field trips were organized to (i) the diamond bearing kimberlites of Dharwar Craton in south India, (ii) lamproites of Bundelkhand Craton in northern India and (iii) diamond cutting and polishing industry of Surat, Gujarat in western India. A series of social and cultural programmes depicting cultural diversity of India were organized during the conference. The Kimberlite fraternity enjoyed yet another socially and scientifically successful conference.

Dr. D. Graham Pearson is Canada Excellence Research Chair – Arctic Resources in Department of Earth & Atmospheric Sciences, University of Alberta, Edmonton, Canada. Dr. Pearson obtained his B.Sc. from the Royal School of Mines, Imperial College, London and his PhD from Leeds University. He taught at Durham University for 15 years, becoming Professor of Geochemistry and now holds a CERC research chair in Arctic Resources specialising in diamonds, kimberlites and cratonic roots. Pearson has been a member of the International Kimberlite Conference Advisory Committee since 2007.

Dr. Herman S. Grütter is currently associated with Department of Earth & Atmospheric Sciences, University of Alberta, Edmonton, Canada. Dr. Grütter has over 20 years’ senior-mining, junior-mining and consulting experience in kimberlite targeting, exploration and early-stage resource definition on projects spanning the globe. He obtained a B.Sc. (Hons) from the University of Cape Town in 1986 and a PhD in metamorphic petrology from the University of Cambridge in 1993. He maintains applied research interests in mantle mineralogy and petrology, and in craton evolution.

Dr. Jeff W. Harris retired in 2006 after a distinguished academic career at the University of Glasgow.  Since retirement he has held an Honorary Research Fellowship at Glasgow. For over 30 years, he was a consultant to DeBeers Consolidated Mines, managing their worldwide outside diamond research programmes conducted at Universities and equivalent institutions; a research endeavour which played a major part in furthering our understanding of geochemical processes operating in the mantle.

Dr. Bruce A. Kjarsgaard is a Senior Research Scientist in Geological Survey of Canada, Ottawa, Canada. Dr. Kjarsgaard received his PhD in Geology (experimental petrology) from the University of Manchester, England in 1990. He has been with the Geological Survey of Canada (GSC) in Ottawa since 1990, working as an economic geologist. His research involves broad based petrological studies (including mineralogy, geochemistry and volcanology) of mantle-derived volatile-rich ultramafic magmas (kimberlite, lamprophyre, nephelinite–carbonatite) and their attendant economic mineralization (diamonds, and niobium and REE, respectively).

Dr. Hugh O’Brien is a Senior Research Scientist in Finland Isotope Geosciences Laboratory (SIGL), Geological Survey of Finland (GTK), Espoo, Finland. Dr. O’Brien received his B.S. in 1982 from University of Minneapolis and his PhD from UW in Seattle in 1988. After a short stint (88–91) with the Geological Survey of Finland (GTK), he returned to Seattle for post-doctoral studies. Since 1997, he has been a senior research scientist at GTK, covering diamond exploration and mantle and ore research using isotopic and electron beam methods.

Dr. Steven Sparks is Professor of Geology in the School of Earth Sciences at Bristol University, Bristol. UK. His research concerns volcanic and igneous processes and he has made contributions in petrology, many physical volcanology, fundamental fluid mechanics, sedimentology, and in hazard and risk assessment methods. He has been past-President of the Geological Society of London and IAVCEI President of the Volcanology, Geochemistry and Petrology section of the American Geophysical Union 2008–2012.